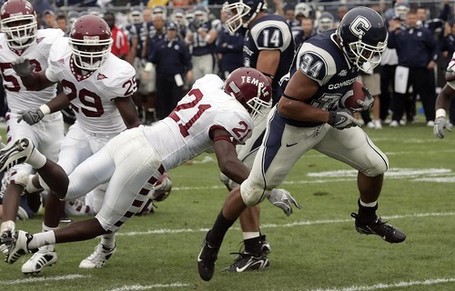 * Note- I am well aware that my figures show a total of 366 runs, while his official numbers say 367.  At North Carolina, he is listed as rushing 33 times, but only 32 runs show up in the play by play.  Go figure.

Donald Brown led the nation in rushing this season with 2083 yards, 233 yds more than runner up Shonn Greene, yet he still posted a smaller success rate (54% to 57%) and ypc average (5.68 to 6.03) than his Hawkeye counterpart. Truly comparing the two is, of course, impossible (as the black and gold torch and/or pitchfork brigade will surely think to remind us), but there are two quick conclusions we can get from the numbers:

Going along with that second thought, I took things a step further and looked at the numbers again, but this time splitting the regular season in half.  In the first six games, Brown actually ran at a much improved 64% rate with a 5.96 ypc, while during the final six he dropped to a woeful 42% success rate and a 4.75 ypc.  Given the wear and tear on Brown from his ridiculous amount of carries at the start of the season (only twice in the first six game did he carry less than 30 times, while only once in the last six did he carry more than 30 times) and the increasingly apparent fact that if you stopped Brown the Huskies weren't much of a threat (they started 5-1 and finished 2-4), it's no wonder both his production and success rate numbers dropped.

As a quick refresher to those of you who have forgotten how this works (or to those who have never heard of "Running Back Success Rate" before), we judge each run on it's "success" as opposed to yardage gained to get a more accurate picture of how good a running back really is. For a run to be deemed "successful," it must gain at least 40% of the yardage needed to move the chains on 1st down, 60% on 2nd down, and 100% on 3rd and 4th down. This type of metric ignores big run outliers that can skew others like yards per carry averages and simple total yardage figures.