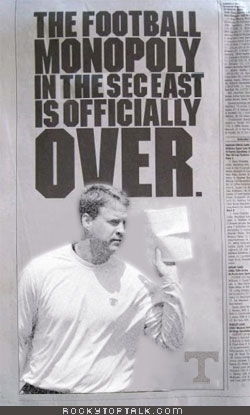 Well, little Lane has gone and got hisself in a bit of hot water when he decided to engage his mouth this week before his brain was fully in gear. As you might expect there has been a bit of reaction out there in the Blogosphere so I went and culled a sampling from the various SB Nation blogs who weighed forth on the subject.

To start, that fine site covering all things Volunteer, Rocky Top Talk, marvels a bit at how fast this incident ballooned into a national brouhaha but finds there is reason to back their dog in this fight. "Humiliation, like most things,” they notes. “Is subject to the law of diminishing returns.” A beatdown is a beatdown but Tennessee wasn’t going to become relevant by adhering to the status quo like in recent years.

RTT also takes the time to put the Kiffin outburst in historic perspective. This is a pretty insightful take pointing out that inviting a series of massive beatdowns this year isn't an entirely insane gambit. We swallowed a 7-6 record with a humiliating loss to UL-Monroe in '07 because we knew it was the first step of "the process." That'll likely hold true for Kiffykins as well. The upshot is a much-needed bit of energy about his program and a very real challenge to ask his players to live up to. Both things that can realistically pay off in '10.

But my fave entry over there are the top five theories about why Kiffin would pull such a damn fool stunt. This one is awesome if for no other reason than it houses the parody of the UCLA "monopoly" ad in the Los Angeles times you see above.

Now if you want the sober-minded dissection of this nonsense I urge you to pop over to Team Speed Kills who cover the whole of the SEC. Their take is that Kiffin knew exactly what he was doing when he took his potshots but, even if he had a good reason to do it, he vastly underestimated the impact it would have. This ain’t Oakland anymore, boy. We take our football serious-like down here.

For more delightful commentary the always loquacious T. Kyle King at Georgia-backing Dawgsports takes Kiffingate as an opportunity to pen an open letter to Urban Meyer concerning the precocious coach of the Volunteers. Despite having his tongue firmly within his cheek the lashing T. Kyle doles out is simply glorious in its horrible brutality. Of course his sage and completely objective advice is to use this incident to focus Florida’s wrath against their common SEC East foe – really. That’s all. Nothing else to see here at all.

Of course then he gets all serious and insightful and ruins the mood in his breakdown of Signing Day. Despite the breast beating he makes the point that cornering Tennessee’s market on recruits doesn’t do much to building a program given the limited number of stars vying for collegiate attention. And as for the current histrionics? “I'm going to delight in the antics of General Peachfuzz until he gives me a reason to do otherwise. I more and more doubt that will ever happen.”

Alligator Army, the Florida section of the SB Nation empire seem pretty much incredulous on the whole thing given the overall theme of “fail” in Tennessee’s recruiting class this year. They then file a post that equates Kiffin’s behavior with the former Iraqi Information Minister’s boasts during the invasion of Iraq (and yes I’m pissed I didn’t think of it first).

They have also begun considering how they should properly welcome Kiffin to the Swamp this year. The idea hasn’t gotten much traction yet, but the possibilities are simply glorious.

Meanwhile, over at LSU stalwarts And the Valley Shook, they seem a bit less sanguine. In fact, it seems Kiffin has just become a four letter word. Not just for swiping one of their star recruits but for way Tennessee handled the episode. And they don’t hold back on the use of such language in this glorious little epistle. Their taut summation: “Let's curb stomp that gentleman who has had illicit relations with his mother.” Or something like that.

And over at the Daily Barner there’s not a Kiffin to be found. Instead it’s all Chizik, all the time.