Your RBR Word of the Day: cormorant

Share All sharing options for: Your RBR Word of the Day: cormorant

cormorant \KOR-mur-unt; -muh-rant\, noun:
1. Any species of Phalacrocorax, a genus of sea birds having a sac under the beak; the shag. Cormorants devour fish voraciously, and have become the emblem of gluttony. They are generally black, and hence are called sea ravens, and coalgeese.
2. A gluttonous, greedy, or rapacious person. 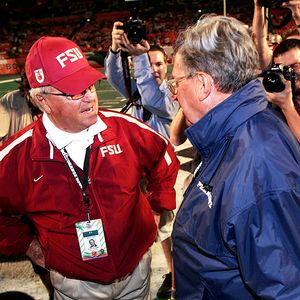 We quickly condemn coaches like Bowden and Paterno as cormorants more interested in their own legacy than the good of the programs they built, but considering the recent resurgence of Penn State maybe these guys should be allowed to walk the sidelines until they're ready to retire.