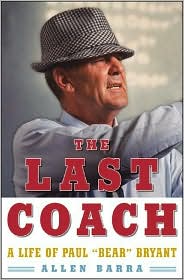 As we put the cruelest month with its famed showers (and tornado warnings) behind us it's worth considering that in just a few short weeks the summer will be here in all of it's sweltering glory.

Perhaps it still seems a good ways off but Memorial Day is right around the corner and after it comes the usual crush of picnics, vacations and whatnot. And that means it's time to start planning the Summer Reading List.

A few months ago, RBR regular Nick’s Hat Band had the brilliant idea of soliciting recommendations for books about Alabama football. Because while there are some truly great volumes penned about our storied program and legendary coach  there is also a heck of a lot of chaff as well.

The clear consensus among the commentariat was "The Last Coach: A Life of Paul "Bear" Bryant" by Allen Barra. No less than six commenters singled it out for praise - twice as many as the second most popular tome, Bryant's book "Bear: My Hard Life & Good Times As Alabama's Head Coach."

All of the recommendations are after the jump. I plan to update the list as more recommendations roll in so please feel free to keep adding your suggestions. Remember, it's a long long off-season and this is one of the ways we are going to survive till Sept. 5.

"The Last Coach: A Life of Paul "Bear" Bryant " by Allen Barra

"Coach: The Life of Paul "Bear" Bryant" by Keith Dunnavant

"The Junction Boys: How Ten Days in Hell with Bear Bryant Forged a Championship Team" by Jim Dent & Gene Stallings

"Namath: A Biography" by Mark Kriegel

"The Missing Ring: How Bear Bryant and the 1966 Alabama Crimson Tide Were Denied College Football's Most Elusive Prize" by Keith Dunnavant

"Turning of the Tide: How One Game Changed the South" by Don Yaeger, Sam Cunningham, and John Papadakis

"The Crimson Tide: An Illustrated History of Football at The University of Alabama" by Winston Groom

"The Crimson Tide: The Story of Alabama Football" (OOP) by Clyde Bolton

"Crimson Slide: Why Alabama Football Fell and How It Can Climb Back to the Top" (OOP) by Mike Flax

"Bama after Bear: Turmoil and tranquility in Tuscaloosa" (OOP) by Donald F Staffo

"I Can't Wait Until Tomorrow ... 'Cause I get better-looking every day" (OOP) by Joe Namath & Richard Schaap

"Ain't Nothin' But a Winner: Bear Bryant, The Goal Line Stand, and a Chance of a Lifetime" by Barry Krauss

"Another Season: A Coach's Story of Raising an Exceptional Son" by Gene Stallings & Sally Cook

"How Good Do You Want to Be?: A Champion's Tips on How to Lead and Succeed at Work and in Life" by Nick Saban

A few notes: This list is organized by number of recommendations. The ones at the bottom are those mentioned but not necessarily recommended by anyone. Books with negative recommendations are not included. Also, OOP =  out of print. I've included the cheapest available version I could find on the Amazon list.