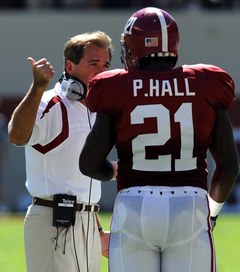 Not out just yet, apparently.  Surprising no one, Prince Hall is transferring to Central Washington, a Division II school.

"I would like to thank the University of Alabama, Coach Saban and the staff for helping me during my career," Hall said. "I think it will be a great opportunity to finish my last year of college at Central Washington, and I am looking forward to it."

Hall was a Freshman All-American in 2006, starting every game that season, but has butted heads with Coach Saban and his staff ever since, losing his starting job to true freshman Rolando McClain and walk on Darren Mustin in '07 and getting "indefinitely suspended" for the spring before 2008 and this year.  Every reason from missing sessions in the strength and conditioning program to missing classes to drug use has been floated for his permanent place in the doghouse, but nothing concrete has ever been reported.  And, to borrow OTS's favorite phrase, being brutally honest there's too many guys already on campus and arriving shortly that are just as good, if not better than, Hall fighting for playing time already.  It's not a loss we'll feel on the field, and it's not a loss we'll feel in the locker room either.  Best of luck to Hall.  He's now instantly the best linebacker in Div II, and hopefully he'll get his head on straight in his last year of collegiate football.