Share All sharing options for: CFB Stadiums I've Been To: BB&T Field

The season is over, spring practice is over, A-Day has happened, signing day is finished and even the NFL draft is now but a distant memory. We're now in the "silly season" as we like to call it here at RBR....that crappy place where we're starved for football content. In the spirit of that, I'm going to do a daily rundown of the various stadiums I've been to for college football games.

There were two things about BB&T field that really made it stand out in my mind. 1) They have a general admission grassy section in one of the endzones that's really cool. Of course, that'd never work in a lot of places, but it was really cool to see people spread out on blankets watching the game. I imagine that's kind of what college football was like waaaaaaay back in the day and it's cool to see a place still doing that. 2) The crowd (general admin grassy section aside) stood for pretty much the entire game. I was surprised to see that in a stadium so small, but maybe since the stadium is so small that only the hardcore fans go. I really wish people stood the whole game at BDS because a) it keeps you more into the game and b) the seats are so tiny that standing would actually be more comfortable. The game was a total bore (a 12-7 win over Clemson), but I dug the stadium. 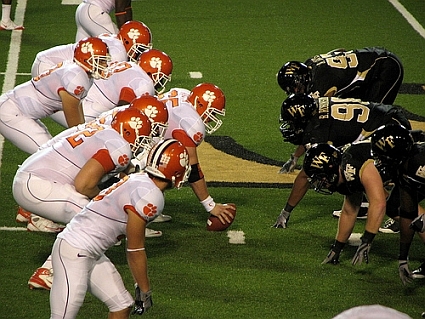 I'm not even a donor or an alumnus and I got an awesome seat at the game. Granted, my camera has a powerful zoom, but still, I was almost on the field.