Share All sharing options for: Antoine Caldwell Goes to Work 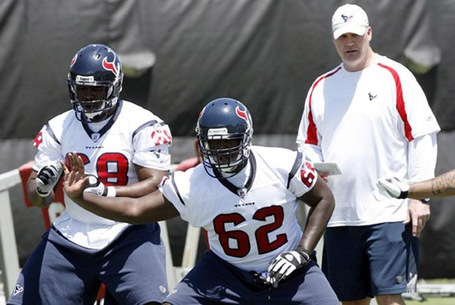 Antoine at the office.

We've spent a lot of... er, ink over the past few weeks discussing the ongoing drama that is the Andre Smith debacle but it's been at the expense of a number of other Alabama players picked up in the draft who've kept a low profile and gotten busy with their work.

For instance, what have you heard about Antoine Caldwell, taken in the third round by the Houston Texans? Not much. But it's not because he's been idle.

Immediately after the draft the SB Nation blog covering all things Houston Texans, Battle Red Blog, declared Caldwell their "favorite pick of the draft" and laid odds the future verdict on his selection will be nothing less than the prize of the the '09 draft class.  Well, it seems he's done nothing but bolster that assessment since. Earlier this week BRB turned in a report on the team's recent OTAs and had this to say:

Antoine Caldwell has been receiving a lot of reps at center, although he said that he doesn’t care whether the majority of his playing time comes at C or G, specifically stating “Beggars can’t be choosers.

The Houston Texan's website has a good interview with Caldwell they posted about a month ago that also has really nice video about how much the team thinks of him. He also pops up in some of the videos of the team's OTA's this week.