We Were All Just Fooling Around, then Houston Nutt Had to Take it Too Far

Share All sharing options for: We Were All Just Fooling Around, then Houston Nutt Had to Take it Too Far 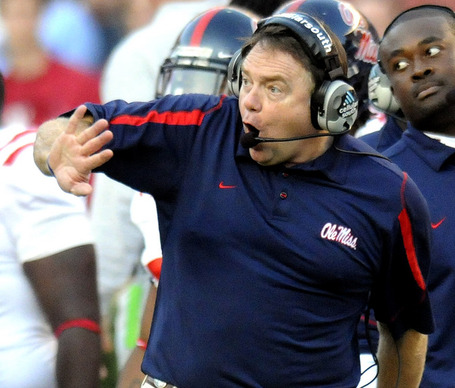 Put that thing away, you hairy monster!

Somewhere amidst the frozen wastes of Michigan Brian Cook just got very warm in horrifying places:

The SEC is considering sponsoring NCAA legislation to cap football signing classes at 28 players, or unilaterally make it a conference-wide rule. Several SEC schools have signed more than 30 players in recent years, including 37 by Ole Miss last February. The NCAA allows 25 players to enroll in the fall.

"I was very concerned last year when we had one institution sign a lot of players, and that was the catalyst for these discussions," SEC Commissioner Mike Slive said today from the spring meetings.

That's right, kids, the SEC is preparing to put a voluntary cap on signees, and yet somehow it wasn't the unspeakable evil that is Nick Saban and his black hearted recruiting practices that did it. Instead, it was Houston Nutt's sly creation of a de facto Ole Miss farm league that got the powers that be to take action.  Is this a bad thing for Alabama?  Probably not.  Saban's second signing class was over the proposed cap at 32 but this year's was only 27, one under the cap, and with the talent streaming in like it is there shouldn't be a need to sign that many again.  And just looking around the league, it's probably a beneficial thing for recruits as well.

There's always the risk of somehow, someway you're not going to be able to defer entry and then you could be caught in a place where you either violate the national letter of intent or NCAA limitations, although I've only seen that happen once in my seven years in the league. (emphasis mine)

Slive makes an excellent point here, but it has only happened once and I maintain that Nick Saban is not the kind of guy that would gamble on the ability of his staff to recruit the kind of top shelf talent he covets by grabbing a bunch of recruits and then screwing some of them (or current players) over.  High school coaches simply aren't going to feed players to a coach/school that they think will end up hurting said player in the long run.  Considering Tennessee coaches were (at least temporarily) banned from a Florida power house for comments made Lane Kiffin that didn't really hurt anything but the town's pride, imagine what would happen if Local Sports Hero X accepted a scholarship from Alabama and found out he wasn't getting it after all because too many people got signed.  Do you really think anyone from that school would be playing for Nick Saban again?  Don't think so. All in all, it's probably a good rule in light of Nutt's hijinks this past signing season, but at the same time I still think it's still an unecessary one.