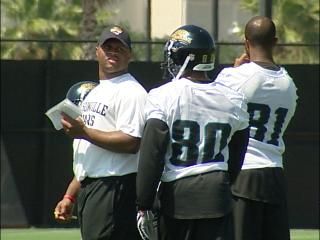 Former Alabama receiver Tyrone Prothro took part in the Jacksonville Jaguar’s three day mini-camp this weekend in an effort to kick-start his coaching career. The former former all-SEC player attended the team’s five mini-camp practices to get insight into coaching at the NFL level.

The opportunity came about courtesy former Alabama head coach Mike Shula, who is now the quarterbacks coach for the Jaguars. Prothro's presence garnered a bit of media attention; Gene Frenette of the Florida Times-Union made a mention of it over the weekend and today The Associated Press and WTLV-TV in Jacksonville did pieces on it as well.

Few moments stand out as starkly in the minds of Alabama fans as the Florida game in 2005 when Prothro went down with the gruesome injury that shattered his leg and ended his playing career. A career that had been so electrifying up to that point it’s still tough to watch his highlight reel.

The damage from the injury lingers. He still has a limp and the leg was "clearly swollen during drills in Jacksonville" according to the AP. He may need yet another surgery. Still, it was good to hear he showed up to take part in the 7-on-7 alumni flag football game at A-Day.

Prothro picked up his sheepskin to a standing ovation last summer and has been steadily working toward a career in coaching since then. According to the AP story, Prothro had sought a graduate assistant slot with Alabama but they have all been filled.

If you’d like to keep up with his progress entering the coaching ranks, it seems he has a twitter feed that he updates pretty regularly.