Share All sharing options for: Yea Alabama 2009 Pre-Order: Go Forth and Consume

At long last, friends, it is here. 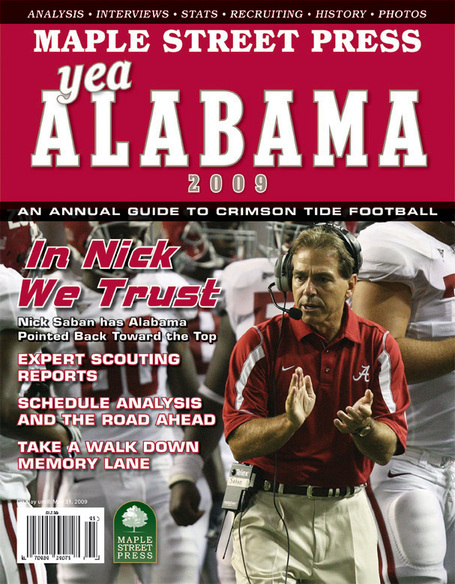 Yea Alabama 2009 prepares the Alabama fan for the upcoming season with detailed player and opponent profiles, as well as in-depth and entertaining features on the team's recruiting and play calling. Of course, no Alabama publication would be complete without a look back at the storied history of the program, and a look forward at what the Saban machine will do next. Edited by Todd Jones and Joel Gamble of RollBamaRoll.com, Yea Alabama is 128 pages of the most in-depth and entertaining Crimson Tide analysis available anywhere.

Though we're certainly proud of our first effort last year, I honestly think we've put an even better preview together this year.  Some of the articles and folks that contributed this year:

Finally, yours truly examined each position on the roster, every recruit signed, and produced a brief primer on the 3-4 defense (with help from Chris Brown of Smart Football).  It's been a lot of work, but I'm exceedingly proud of the effort and hopefully you'll all find it was worth it.  Pre-orders are scheduled to ship on July 6th, while in store is July 27th, so go ahead and reserve your copy, and also 17 more copies for friends, family, neighbors, and pets.  Shakespeare got to get paid, son.