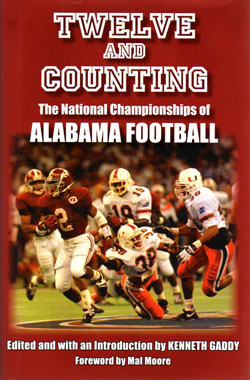 Twelve and Counting; the National Championships of Alabama Football is a collection of oft told tales retold once again. Produced by the University of Alabama in a partnership with the Paul W. Bryant Museum, the book is a study in Crimson Tide orthodoxy and does it rather well.

The book is a whirlwind tour through the twelve National Championship seasons the Alabama football program achieved in the 77-year span between 1925 and 1992. Each chapter gives a rundown of the games, an accounting of the major events and, inevitably, a detailed description of the bowl game that capped off the championship effort.

Included are all the usual anecdotes (such as Coach Wallace Wade’s disastrous interview for the head job at Kentucky and Coach Bryant knocking the practice room door off its hinges) and the requisite breathless recounting of the great plays (like the Goal Line Stand versus Penn State in ’78 and George Teague running down and stealing the ball from Miami’s Lamar Thomas in ’93).

And that’s exactly what it is supposed to do.

The question of how many National Championships the Crimson Tide can rightfully claim sparks heated debate among both staunch fans and derisive rivals. For the most part, Twelve and Counting simply sidesteps the issue, accepting the University’s tally of an even dozen as the figure and moving forward with its mission. (Allen Barra adds a Gnostic final chapter that touches on five other seasons that can be reasonably considered as well.)

The book’s biggest selling point proves to be a bit of a double edged sword. The compendium of writers offer a varied and dynamic voice to the recounting of the most famous seasons in Alabama Football history but it’s also burdened by the their manifold weaknesses as well.

Some of the chapters are helmed by skillful writers (Winston Groom, Keith Dunnavant) who bring their expertise in sportswriting to bear but these efforts don’t provide much more insight into the dynamics of the teams they tell of.
Other authors bring a wealth of glorious technical detail to the effort (Taylor Watson, Wayne Atchenson) but the going can be difficult for the casual reader. And, as always, as delightful as it is to revist Coach Gene Stallings accounts of his days leading the tide, the personal perspective limits the view of his ’92 championship team.

While this book is a nice sampler of  some of the better known authors who have penned works about Crimson Tide football, in the end Twelve and Counting is and effort penned for the die-hard fan who should enjoy it immensely.

Next week: How Good Do You Want to Be?