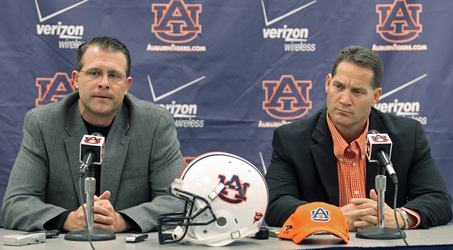 We are not wearing pants.

As much as we like to bash on Chizik for being the boob that he is, the bona fides of the barn's new offensive coordinator, Gus Malzahn, are much more sound. As the assistant HC at Tulsa last year, he oversaw a Golden Hurricanes squad that lead the nation in total offense and scoring. Hopes are high on the plains he will succeed in bringing a similar high-powered attack to Jordan-Hare.

Recent reports out of Opelika indicate that what is being installed in is an up-tempo, no-huddle attack relying on precise timing. Controlled chaos is one way the players are describing it. "We just run play after play after play," said quarterback Kodi Burns. "We’ll have an advantage over defenses by wearing them down."

This was enough to pique the interest of Chris over at Smart Football who gave a peek at the Malzahn creation (if you click one link in this story to read, the one in this sentence is it). His assessment:

It's still worth asking what his Xs and Os will actually look like. And, if spring practice is any indication, we know the answer: a lot like they did at Tulsa.

If that sounds at all too familiar... there is a good reason.

Last year offensive whiz kid Tony Franklin was brought in to soup up Auburn's languid offense - then unceremoniously shown the door when things went off the rails. His ignominious exit raised a hell of a lot of questions concerning chaos in the football program as well as athletic department as a whole that - conspiracy theorists aside - Franklin's recent interview with the Montgomery Advertiser tended to confirm.

While it's reasonable to assume things will be different this year it's not clear if that means things will improve. According to our own Pete Holiday, the high-octane approach Malzahn (and Franklin) offer face one serious (and unbeatable) hindrance in Opelika - lack of talent.

"Malzahn's offenses have run wild when they have vastly superior talent, but folded when faced with even the slightest resistance."

Without talent, Holiday notes, the will to resist is likely to be at a noticable low. Case in point. The clockwork accuracy of the Malzahn offense puts a premium on the QB and the current situation at that position in Auburn is... unsettled. Add to that the challenges of implementing the third offense in as many years... well, while the optimisim is understandable the odds against Malzahn seem steep to the point of insurmountable.