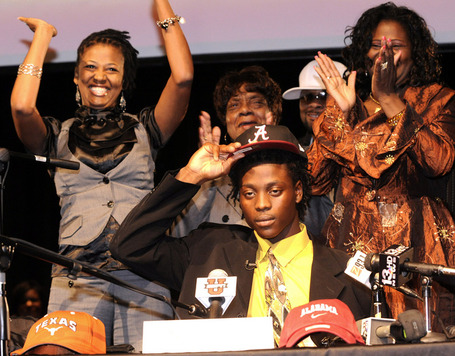 Again, this is very big news for Tide fans. Many considered Kirkpatrick the top prospect in the 2009 recruiting class, and had he been unable to qualify academically, he would have instantly become the biggest academic casualty we've ever had. Fortunately, that has been avoided, and I imagine should be on campus shortly, if he is not already at this point. Apparently, Kirkpatrick originally reported to UA in late May and only then realized he needed some more academic work, so he should be on campus for the start of the second summer session. Hopefully he can pick things up quickly, because Kirkpatrick ought to be able to fill a meaningful role immediately.

With Kirkpatrick now in the bag, we are once again back down to three signees remaining on the bubble academically: Michael Bowman, Eddie Lacy, and Darrington Sentimore. We should find out on those guys sometime in the next few weeks.