Out of Curiosity: How DID Julio Jones steal the spotlight from A.J. Green?

Share All sharing options for: Out of Curiosity: How DID Julio Jones steal the spotlight from A.J. Green? 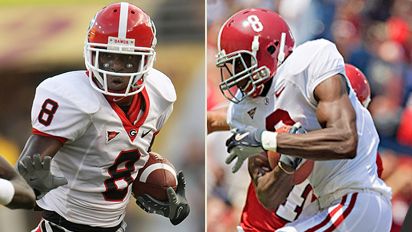 Inspired by kleph's Stupid Question of the Day fanpost from Friday (and therefor AJC columnist Bill King's poor answer to said question), I thought it was time for another "Out of Curiosity" post to take a look at some of the reasons Julio Jones has received more attention and hype than A.J. Green despite both being VHT Five Star types that had stellar freshman seasons.  King has two theories about it, one of which has merit and one of which could have merit if it wasn't wrapped in pure, homer paranoia, while I have five (hopefully solid) reasons of my own.  Let's begin:

Julio was simply a higher profile recruit than Green.  Though both were arguably as highly touted by Rivals (the #1 and #2 receivers, respectively, and both were top ten overall recruits), Green committed to Georgia in October of '06 while Julio waited until National Signing Day to choose Alabama (at a televised news conference, no less).  In the four months between commits, Green flew under the radar while Jones remained in the public eye by refusing to name his leader while also taking all of his official visits, and reportedly being asked to leave during an official visit to Florid for  "recruiting" for Oklahoma (which all turned out to be nonsense, but it was still quite a story).  Further, while Green was certainly a huge get for UGA, it can be argued that he was just another link in the chain of stellar recruits that Mark Richt has brought to Athens over the years, while Julio put the cherry on top of what turned out to be the #1 recruiting class in the country at a program that hadn't been doing so well in that regard for...ever, really.  So even though both were big gets for their respective programs, the differing circumstances surrounding their individual recruitment made Julio a household name and Green just another VHT at a school that was no stranger to them.

Julio was a bigger part of Alabama's passing game.  This actually ties in with King's theory that Julio deserves more credit because he was stuck with a "servicable" John Parker Wilson running the Tide offense while Green had the luxury of Matt Stafford, the eventual #1 draft pick, throwing to him.  This one actually has merit to it, if only for the fact that, with a QB like Stafford, the ball was being thrown around a lot more and there was a greater emphasis on the passing game.  The numbers bear that out as well:


Looking at the top three receivers for each team last season, a few things ought to jump out at you:

1. The top three receivers for UGA were just that; receivers.  Meanwhile, the Tide's #2 man was a Tight End and, to take it even further, the Dawg's 4th and 5th leading receivers were WRs while the Tide's Glen Coffee (a RB) was fourth ahead of WR Marquis Maze at Alabama.

2. Though Green led the team in receiving yards, Massaquoi actually led the team in number of receptions and tied Green for # of receiving TDs with 8.  Meanwhile, no one on the Tide's roster came close to touching Julio's production from a # of receptions or receiving yards standpoint.  Green was clearly a crucial cog in the UGA passing game, no doubt, but given Massaquoi's similar production and the fact that Michael Moore was a reliable third man, Greene didn't carry the burden of receiving production alone.  Julio, on the other hand, was essentially the entire passing game for Alabama.  Furthering that thought...

Knowshon Moreno stole A.J. Green's thunder, not Julio. With Stafford, a solid overall receiving corps, and a star at tailback, the Dawgs had a much more balanced attack than the Crimson Tide, and therefor the individual cogs in the UGA offense had more opportunity to shine.  This made Knowshon Moreno very happy:

This is in no way meant to imply that Moreno is some sort of showboating hot dog, but let's face it, when you have teammates leaping over defenders and creating some of the more iconic images of the season, it's kind of hard to separate yourself from the pack. In Alabama's case, though Glen Coffee and Mark Ingram (and Roy Upchurch, when healthy), were solid running backs they weren't out making highlight reel moves, they were simply lowering their shoulders and running defenders over. Julio, on the other hand, was a one man highlight reel:

This all goes back to the idea that Jones was able to remain in the public conscious while Green was just another part of the Georgia offense.

Alabama had the better season.  This is probably the biggest reason Julio has received more hype and attention than Green, and one King somewhat touched on in his column (in a condescending, homerish way):

So what’s the difference in how Green and Jones are being perceived? Does Jones being on a team with the magic name of "Alabama" that went to the SEC Championship play into it?

Yes it does and, quite frankly, it should.  Before the Tide and Dawgs met last season, Georgia was a national title contender, and thus the focus of plenty of media coverage and the attendant scrutiny of it's players.  After that game, though, Alabama became the national title contender and, considering Georgia was absolutely slaughtered by Florida four weeks later and dropped their season ending match with Georgia Tech, remained heavily in the discussion of "best teams" in the country while Georgia fell off the radar.

No one knows what the Georgia offense will do in 2009. Now that Stafford, Massaquoi, and Moreno are in the NFL, there is far more uncertainty about the Georgia offense than there is Alabama's.  Though the Tide will try and open up the passing game and develop receiving threats outside of Jones in 2009, all the elements are their to continue the kind of physical, run first approach that dominated the play calling in '08.  Mark Ingram and Roy Upchurch are back to continue on with the power running, the TE position is again one of the deepest we have, and we have another smart if unspectacular QB that can make the throws necessary but who's biggest asset is taking what the defense gives him and avoiding negative plays.  With the mindset that Alabama will be doing pretty much the same thing it did last year, it's only natural that a focus be put on Julio Jones, who was such a big part of the offense's success.  Georgia, on the other hand, has more pressing concerns like finding a QB and replacing Moreno in the backfield, two issues that are going to be first and foremost in the minds of fans and the media when discussing the upcoming season.

All in all, Georgia fans have every right to consider A.J. Green one of the top receivers in the SEC (and even in the country) and should hold out high hopes that he will continue to develop into a truly elite player, but what they shouldn't do is get upset that Julio Jones is receiving more attention in the preseason.  He earned it.