RBR Reading Room: How Good Do You Want to Be?

Share All sharing options for: RBR Reading Room: How Good Do You Want to Be? 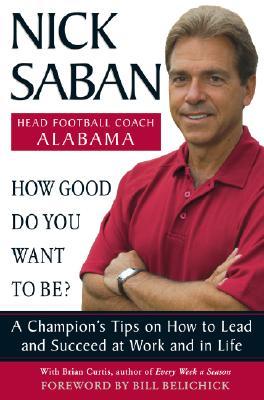 You magnificent bastard... I read your book!

Make no mistake about it; Nick Saban’s book How Good Do You Want to Be? ain’t about the X’s and O’s. And since it was penned in 2004, you best prepare yourself for a heapin’ helping of LSU if you decide to give it a gander.

Basically, this is a motivational book set in the context of a National Championship-winning football coach. Beyond that it's slim pickings. Yeah, there some pictures of Saban as a kid and it's got lotsa remembrances of growing up in West Virginia but How Good Do You Want to Be? is a self-help book at its core, not a key to understanding what makes this man tick.

Yet the fact Saban would even write a book such as this is pretty illuminating. The modern big-time college football coach is a CEO of a multi-million-dollar business and How Good Do You Want to Be? is the kind of basic by-the-numbers motivating tool such executives find helpful. Every chapter finishes with a power-point-style synopsis and it even has a description of how to write a mission statement. You find yourself almost hoping there's a reference to TPS reports to leaven the mood.

None of which is to say there aren’t a number of glorious aspects that make How Good Do You Want to Be? worth reading. Far to the contrary. As Alabama fans, we urge you to go immediately to Chapter 4, Lesson 13 "Create a nightmare for your opponent" and begin reading. If those next three-and-a-half pages don’t make you shiver evilly with anticipation you best get your blood pressure checked ASAP.

So, yeah, if you pick up How Good Do You Want to Be? you better be ready to wade through lots of the time-honored standbys that populate motivational self-help books. You got illustrative anecdotes (Stallone's writing Rocky, Michelangelo painting the Sistine Chapel, the guys who wrote Chicken Soup for the Soul) and inspirational name dropping by the bushel (Michael Jordan, Tiger Woods, Pat Tillman). At the same time, gird yourself for a lot of institutional jargon ("culture of expectations") and motivational sayings ("Get out of yourself and into the team!").

The upshot is you also can catch a few glimpses into the technical aspects of Saban’s approach to the game as well as cementing some of his key philosophies about coaching it. If you believe in The Process then this is its sacred text.

“The process,” Saban writes. “Is much more important than the result.”

Perhaps the most illuminating aspect along these lines is the opening chapter where he recounts LSU’s 2002 and 2003 seasons and offers an overview of his perspective of the challenges of leading teams through the brutal gauntlet of SEC play. The way he chose to motivate his players and his preparations for the various games add a lot of light to what might be going on behind the closed doors in the Mal Moore Athletic Facility over the next six months.

Two other interesting points he goes into some detail about are his system to handle in-house disciplinary matters, and a rather lengthy explanation for his complex and often contentious relationship with the media. His cautionary advice concerning the internet also suggests the possibility for a one-on-one interview here at RBR isn’t likely to be forthcoming any time soon.

And, when you least expect it, Saban drops a nugget of information in the narrative you kind of weren’t expecting but sends ones imagination wandering into dangerous and wonderful places. Like the fact he wanted to own a car dealership before becoming a coach, that he took over Pete Carroll's assistant coaching job at Ohio State in 1980 or, most bizarrely, that he almost became an assistant under Bobby Bowden at West Virginia.

Overall, this book helps answer some of the questions about why Saban chooses to do some of the things he does but it doesn’t do much to smooth the man’s rough edges. As a motivational tool, How Good Do You Want to Be? doesn’t give you anything Norman Vincent Peale didn't do more than a half-century ago and better. But don’t think for a second I’m not planning to get my copy signed to have on my desk to give me that daily jolt of inspiration only The Process can provide.

Next week: Coach Tommy of the Crimson Tide