Share All sharing options for: The Pass Happy SEC Reconsidered

We all know that the SEC is a run-heavy conference, right? To be sure, we have reached the point to where offensive "balance," loosely defined, is considered a must, but clearly the general thinking among many talking heads and most fans is that any offensive design needs to be tilted towards running the football. The consensus among talking heads and casual fans alike, for whatever reason, focuses on how teams are striving to achieve a 60/40 run/pass split. I can personally sure you that will hear Gary Danielson cite that every single week this Fall, for example. But is all of that stuff really true, and does the generally accepted notion of the 60/40 run/pass split realistically describe modern day SEC football?

I asked those very same questions last year, and after a bit of research I ultimately came to the conclusion that none of those generally accepted notions contain any real truth. I frankly have no clue where the notion of a supposedly ideal 60/40 run/pass split came from, but one way or the other it is not embodied in the raw data. Not a single team in the SEC was as conservative as the 60/40 run/pass split -- Auburn ran the ball more than any other team in the conference, about 58% of the time -- and only the War Eagles and Georgia were even remotely close. Furthermore, despite all of the notions about the SEC being a run-heavy conference, the exact opposite was true. In fact, in 2007, the SEC saw more passes than runs, and eight teams in the league were effectively throwing the football 50% of the time or higher. Despite popular contention to the contrary, the SEC was in fact a pass happy conference.

I ran those numbers again recently for the 2008 season, using the same methodology, and the ultimate conclusions were the same, if not to an even greater degree. The following are the run / pass ratios for the SEC teams in the 2008 season: 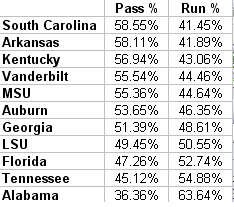 Digging deeper, the conclusions become even more definitive. For example:

The only true run-heavy team in the conference was Alabama, where the Tide ran the football almost 65% of the time. From the outset, this answers any lingering questions about whether or not such a run-heavy team can still win big; clearly they can, and it should come as no surprise. There is no surer way of victory than to be able to consistently and repeatedly line up and run the football straight down your opponent's throat. Of course, though, having all of the pieces in place in order to be able to do that consistently is a very difficult thing to do, and the 2008 Crimson Tide was very much a rarity in that it had all of those pieces in place. Also, the run / pass numbers for the Tide are skewed a bit because we spent most of the season with huge leads at which point we were just trying to run out the clock for the remainder of the game. Without having done the specific research just yet, I imagine our run / pass splits were nowhere near this extreme in situations where the game was still very much in contention. Furthermore, moving forward, with Nick Saban having lined up three highly-touted quarterback recruits, more than ten wide receivers rated four-stars and higher, and several elite tackle prospects, the Tide will air it out much more often in the coming years. Even for Alabama, the extreme run-heavy levels of 2008 will be an anomaly.

Once again, on the whole, the conclusions seem quite clear. Talking heads may go on and on about how the SEC is a run-heavy conference, but that is simply not the case. That may have been true many years ago, but the modern day SEC is simply a pass happy league.

ed- As some of you may have noticed, I did not include Ole Miss in this analysis, just as I did not include Arkansas last year. The reasoning in both cases was their widespread usage of the Wild Hog / Rebel, and with both teams using that so heavily, it made them effectively impossible to fit into this type of analysis. With tailbacks and wide receivers lining up at quarterback and occasionally throwing the football, etc. it’s just impossible to get a good grasp on what was actually going on without specifically breaking down the game film.

I will say, though, even if you apply this exact same methodology to Ole Miss’ 2008 season, they would have been one of the more run-heavy teams in the conference, but nothing overly special. They were 55% run and 45% pass, and the difference is negligible to the point that the overall conference run / pass splits only drops a few tenths of a percentage point as a whole.