The Scents of the SEC

Share All sharing options for: The Scents of the SEC 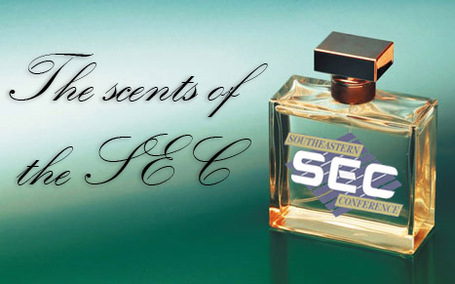 If you wanted to capture the smell of  my collegiate experience you'd have to encapsulate the odor of stale beer and abject frustration slathered over the pungent odor of abiding penury. It's not something I'd suggest bottling and trying to sell but it seems someone thinks there might be a buck in doing just that.

Masik Collegiate Fragrances, of Harrisburg, PA, is producing a line of perfumes and colognes based on various universities and specifically targeting schools with strong football fanbases. Since they intend to charge $60 for each 3.4-ounce bottle of the stuff, they seem to be aiming for a slightly more affluent level of nostalgiac than myself.

For example, according to the company the "signature scent" for LSU involves a mixture of  Provencal Lavender, Oakmoss and Indonesian Vetivier. Which, no matter how pretty you word it up, doesn't quite seem to capture the essence of cheap bourbon and human sweat that sweltering September afternoons in Death Valley are likely to produce. And the absence of any hint of corn dog is downright unforgivable.

With that in mind, we humbly offer the following suggestions in creating the distinctive fragrances for the rest of the conference: