As you can tell from the current series "Stadiums I've Been to for College Football Games," I like to travel to watch football. Furthermore, as I'm sure you've astutely observed, my team doesn't even have to be involved for me to want to make the trip (e.g. Chapel Hill, Winston-Salem, Starkville, etc.) With that in mind, I've conceived a Top 10 list of places I'd like to see Alabama play and I've ranked them in terms of a combination of the destination itself and the quality of the opponent.

Some awesome potential opponents have been left off of the list because, frankly, they aren't located in places that I particularly want to visit outside of the scenario of a football game being played there. Norman, Oklahoma is a place that fits that bill. Morgantown, West Virginia and South Bend, Indiana are also on that list. And before the Sooners, Mountaineers and Fighting Irish reading this get all huffy about my assessment of their towns and say "Well, Tuscaloosa isn't exactly a vacation destination either," I say to you, "You're absolutely right. If Alabama didn't play football there, I'd have no real reason to go there either." Basically, I'm not pointing any finger at anyone else that I'm not pointing at myself on this one.

There are some fairly major vacation destinations I left off of the list because I have no real desire to go there or we've got it on future schedules already. In the "I have no real desire to go there department," I'm looking at you Las Vegas. At best, Las Vegas would've come in at #10 on the list. If I want to go have a wild weekend, I'll go to New Orleans thank you very much....which I can easily drive to. Not only that, it has better music and food and it doesn't have imitation versions of other cities in it. In the "we have future road trips planned there soon" scenario, New Orleans and Atlanta fit that bill. We're headed to New Orleans to play Tulane in 2012 and we've been playing neutral site games in Atlanta a lot lately as well as having a trip to play Georgia Tech in 2014 on the docket already.

There were also quite a few near misses of places I'd like to go, but they typically missed out because of the quality of the opponent, or because they just didn't make the overall cut on destination desirability as much as the others did.

No, I don't have any burning desire to go to New Brunswick/Piscataway, New Jersey, but I'm always up for a trip to New York...and according to Mapquest, the two are a mere 36.23 miles apart. 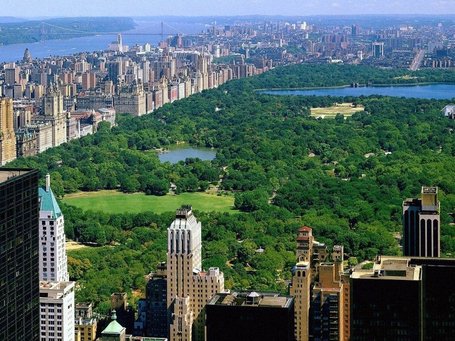 Pickup game of football in Central Park anyone?

Seriously. How awesome would this trip be? New York & Alabama Football. Namath would be in heaven. We should schedule this as a tribute and a "thank you" to Joe if nothing else. Additionally, I'm not sure that we've played in the neighborhood of NYC since the 1986 Kickoff Classic where we beat Ohio State 16-10 at Giants Stadium. Warren St. John could put the Friday night party together. You know he's got connections...or the Greater New York Alabama Alumni Association could put something together. I've got a feeling those folks could put on a pretty serious party.

From an historical perspective too it makes sense. One of college football's most storied programs playing in the Birthplace of Intercollegiate Football (they invented it, we perfected it.) Just imagine the field day ESPN could have putting pregame montages together: old Rutgers football photos from the 1800s shifting into clips from the 1926 Rose Bowl going into a series of Bryant-era clips going into a montage of the resurgence of Rutgers under Schiano and Alabama under Saban. Really, this stuff just writes itself.

This game would figure much higher on the list if Rutgers and NYC were easier to get to from one another. Looking at the NYC/NJ subway map, I'm guessing you'd have to make quite a few transfers (and a decent time investment) to get from Manhattan to New Brunswick (and even further and longer if you're staying with your hipster friends in Williamsburg...if they/their parents can still afford rent that is.) That being said, this is the closest D1 football has to offer for a trip to New York, so I say we snag it. Set it up Mal!