The Crimson Tide Covers the World

Share All sharing options for: The Crimson Tide Covers the World 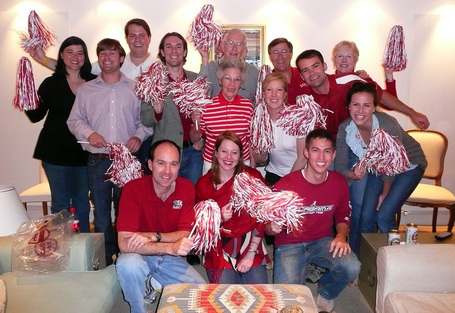 Bringing culture to the underprivileged. Crimson Tide fans gather on gameday in London.

"Wherever you go," as the saying avers. "There you are." And if you are a Crimson Tide fan it also means a little bit of Alabama has arrived with you no matter how alien a locale you happen to find yourself in.

Being based in Lima, Peru for the past five years, I've gotten to know the particular trials a fan of college football in general and Alabama football in particular. And so, when Todd was putting together this year's issue of Yea Alabama he asked me to pen a piece examining the experience of the expatriate Bama fan -  "A Bama Fan Abroad."

Because as hard as it is to carry your devotion to Alabama football with you when you travel abroad, it's infinitely worse trying to survive when you live overseas. The passion is there but the community is not. In the process of my research about  that topic, a number of folks responded to my inquiries and I really had no way to include them all in the space available for the magazine. So this teaser article is my way of addressing that situation...

Andrew Brock and his wife Kelly moved to London, England in 2006 due to his job and it wasn't long before they met another couple with ties to the Capstone. Last year, after several attempts, they succeded in fouding what they believe is the first international chapter of the Alabama Alumni association.

The primary focus of the group are getting together to watch the football games during the seaon. As many as two-dozen folks will pack their apartment even though the kickoff is sometimes at 1 a.m. on Sunday morning. By far the best gathering was the packed house singing "Rammer Jammer" following last year’s Iron Bowl, Brock said.

"To me, it showed that no matter where you are in the world, nothing is sweeter than shutting out Auburn at home and having some fellow Alabamians to sing along," he said.

In terms of bringing the game to the locals, Brock says there is a bit of common ground with the Brits due to the intensity of the rivalries amongst the various supporters of British football (soccer). What tend to cause the greatest fascination on the part of the English are the sheer size of US football stadiums – often twice the capacity of those for England football matches – and the phenomena of tailgating.

"They just do not have the land for tailgating," Brock says. "Instead, most people spend a few hours in a pub before heading into the match."

There is, he says, a strange paradox in one’s fandom after you spend significant time overseas. On the one hand, the distance  sharpens ones appreciation of the both the team and ties to the university. At the same time, it can dampen one’s connection to the experience.

"It’s easy to forget about the losses when no one around you cares and there is no local media coverage of the game," Brock said. "After a while, you learn to let games slide off your back a great deal easier."

Scott Bowden is another Alabama alum and world traveler. Since graduating in 1985, his job with Chevron has taken him across the globe with stints in England, Germany, Canada, Australia, Nigeria, Benin, Toga, Ghana, China, Kazakhstan, and Angola. To name a few. 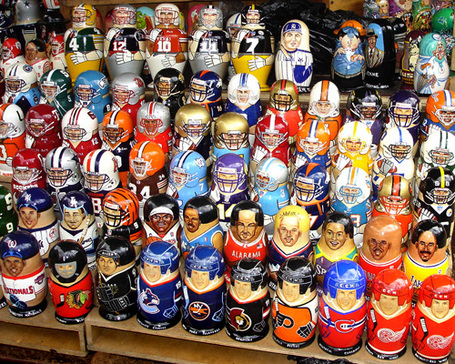 Admit it. You want one.

He currently resides in Moscow and credits his survival during football season to Slingbox - a device that allows remote viewing of cable tv using the internet. Bowden rigged the device to his mother's TV in Jasper, Alabama and never misses a game.

As alien as US-style football is in Russia, Bowden has discovered what is, quite possibly, the greatest Alabama-themed item for sale outside the continental United States - Matreshka stacking dolls featuring the likenesses of Crimson Tide football players.

Still, when you get as far afield as Bowden does, finding college football aficionados, much less Crimson Tide fans, is pretty rare. Particularly in the oil patch which is a field that tends to be dominated by A&M Aggies, Texas Longhorns, and LSU Bayou Bengals.

But one night in Ghana a few years back proved to be the exception. While having dinner with a group of guys working on the West African Gas Pipeline Project, Bowden bumped into another ‘Bama alum and, as you might expect, started talking football.

"The next thing I knew, one of the new accountants spoke up and he was from Alabama. Then a visitor doing consulting work for the World bank spoke up, and he was a 'Bama Alumni. Then a welding inspector came in the room, and he was from Mobile, and a lifelong Tide fan! Finally, another engineer walked in, and, you guessed it, he's a 'Bama Grad!  Six Alabama grads at the same dinner table on the same project in Accra, Ghana, talking Tide football."

"There's an Auburn joke in there somewhere," he says. "I just know it."