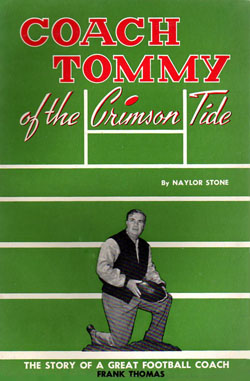 That there is no authoritative biography of this legendary Alabama football coach borders on criminal. About the only tome to be found is a slim volume penned by sportswriter Naylor Stone in the mid-1950s almost immediately after his death, Coach Tommy of the Crimson Tide. In just 86 pages it attempts to circumscribe the career of a man who led the Crimson Tide to no less than two National Championships and three undefeated seasons.

In fact, if remembered at all today, Coach Thomas tends to be recalled for his role mentoring Bryant as a player and a coach. Still, it's worth noting that while Coach Thomas has been almost completely eclipsed by his famous protege, he never suffered a single losing season during his career – something Coach Bryant was not able to boast.

Coach Thomas himself was the protegee of Knute Rockne. Playing for Notre Dame in the 1920s with the famed "Four Horsemen" and George Gipp who was his roommate during college. Coach Rockne called Thomas the smartest player he ever coached and, unsurprisingly, hired him as an assistant after the younger man's playing days were done.

It’s through Rockne, that Coach Thomas found a particular manner to lead his charges later and a particular genius for winning mid-game strategy changes. Both attributes he passed down to his most famous pupil.

One particularly interesting aspect of Thomas’ career is his time as an assistant at Georgia under George Woodruff. When Coach Thomas took over at Alabama he brought the Notre Dame Box offense with him but, it turns out, he had already introduced it to southern football at Georgia while serving as backfield coach for the Bulldogs.

The offense became synonymous with Crimson Tide football due to the team's success under Coach Thomas but it certainly wasn't unique to the region's teams by the time he implemented it in Tuscaloosa. 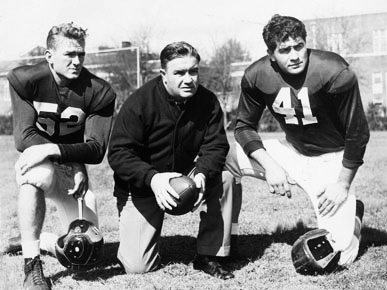 While Coach Tommy of the Crimson Tide is an important snapshot into an oft-overlooked era of Alabama football,  often reads like an overlong newspaper fluff piece from the period. It relies on interviews with both Coach Thomas and his wife but little else. There is little inkling of the charisma and leadership of the man that pressed so heavily on Coach Bryant and molded the latter’s legendary leadership style.

In fact, there’s little of anything in terms of the man’s personality outside of glowing reports of each season and a dultiful accounting of his civic work. But that’s at least partially forgivable given the fact the book was written so shortly after the coach’s death.

There is little inkling of the man that had such a reputation for toughness that a young Paul Bryant was terrified of him.  "Scared of him? You're damn right I was." Bryant later confessed. In The Last Coach, Thomas is described by Bryant as having an "aloof, imperious way" that left as lasting impression on the young man as much as his tactical expertise. But almost none of this is evident in Coach Tommy of the Crimson Tide.

And, since the book was published in 1954, Bryant is an ancillary aspect of the narrative at best. The future Crimson Tide coach doesn’t appear at all in the first third of the book and when he does make his entrance it’s by last name only. Eventually, he’s duly noted for his exploits as a player (particularly the infamous Tennessee game he played with a "bad" leg) and as an assistant on Coach Thomas’ staff.

If nothing else, the book does a valuable service in showing the stature of the Alabama program and the tradition of a championship-caliber team that preceded the Bryant Era. But the most important legacy of Coach Tommy of the Crimson Tide is how clearly it demonstrates the need for a definitive book examining the career of this oft-overlooked championship coach.

Next week: The Junction Boys