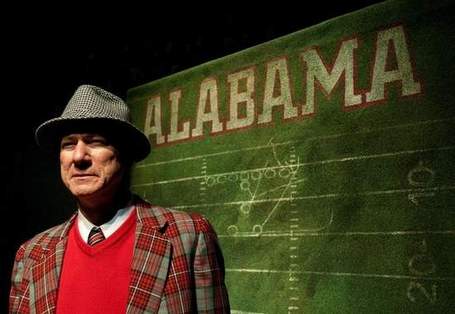 It isn't football but might be enough to hold us over during the stretch run to the season. The Alabama Shakespeare Festival is bringing their hit play about the life of legendary Alabama Coach Paul "Bear" Bryant, Bear Country, to Birmingham this August.

Set on Coach Bryant’s final day before retirement, Bear Country tells the story of the legendary coach’s life and career through a series of flashbacks. The performance requires four people playing about 15 different roles.

Mi­chael Vigilant, the chief operating officer at the Alabama Shakespeare Festival, penned the play on the suggestion of another official with the organization. In writing the work he relied on the substantial literature available Coach Bryant’s life as well as personal interviews with his former players.

Bear Country premiered at ASF’s Octagon Stage in Montgomery last January and was a major hit, becoming the venue's highest grossing play ever during its six week run.

Almost the entire cast from the Montgomery performances will be taking part in the Birmingham production. Tim Rhoze will also return as the director. The look of the play will be similar to the Montgomery production as well (photos of that set under construction can be found here).

Bear Country will run from August 6 through 30 at the Virginia Samford Theatre at Caldwell Park in Birmingham.

Click here for Nico2.0's review of the Montgomery performance.