Such a Tease: The History of the 3-4 Defense and Another Preview Shot

Share All sharing options for: Such a Tease: The History of the 3-4 Defense and Another Preview Shot

In writing the 3-4 defense primer for this year's edition for Yea Alabama, I was forced to cut a lot of the "history" aspects due to space limitations (and the fact that OTS's O-Line article went twice as long as oringally planned, with sexy awesome results), but a lot of it was fairly interesting stuff that I enjoyed researching and I'm sure a lot of you would be interested in.  But, being the doofus that I am, I didn't bother saving the unused text after the article was submitted so....yeah.  Thankfully, NFL Gridiron Gab has a great rundown on it's history and some interesting notes on our own beloved Nicktator and his development into one of the top coaches in the country under Bill Belichick.

When Belichick arrived (in Cleveland after a successful stint as DC of the New York Giants, a 3-4 team), he began dismantling not just the team but, in many respects, also the entire Browns organization so as to be able to rebuild it. From changing the way the Browns practiced, traveled and even ate, there was nothing he didn’t put his hands on.

Sound familiar? Not only did Saban learn about defense from one of the best defensive minds in the NFL, it would appear that the groundwork for The Process was laid in Cleveland as well.  Further:

"Bill found a defensive coordinator he really liked in Nick Saban," said current Virginia HC Al Groh who was an assistant on Belichick’s Browns staff. "Even though the defense was the part of the team that Bill felt the most passionate about, he felt comfortable in putting Nick in charge of it. And Nick’s expertise was in the 4-3 — that was consistent with his background, that’s what he was familiar with — so that’s the defense he put in."

Two things to note here: First, Belichick was comfortable enough with Saban's abilities that he turned over the part of the team that got him the HC job in Cleveland to begin with, despite the fact that Saban ran a different defense than the one that had taken the Giants to two Super Bowl titles in five years with Belichick (and Lawrence Taylor) wreaking havoc on NFL offenses.  Second, Saban continued to use the 4-3 scheme he was more familiar with from the time he took over as DC for the Browns up until his move to the Miami Dolphins.  If you'll remember, Saban's defenses at LSU were 4-3 based defenses (you can actually download one of his LSU playbooks here, and every base diagram calls for four down linemen), and even during his time at Miami he was essentially running a 4-3 defense though most of his time with the Dolphins.  I would happily wager that Jason Taylor, a prototypical "Jack" linebacker if there ever was one, had more to do with his move to a 3-4 scheme than anything.  Taylor, who played weakside linebacker for Akron before moving to defensive end his senior year, was a versatile enough athlete to play with his hand down and standing up and gave Saban the ability to completely disguise his defensive front, something the 3-4 is tailor made for (and a topic I get into in Yea Alabama).  Anyway, it's a great read and it ties in nicely with this Yea Alabama tease, so go check it out, right after you pre-order your copy of Yea Alabama '09 (remember, you need 42 copies).  As for the tease: 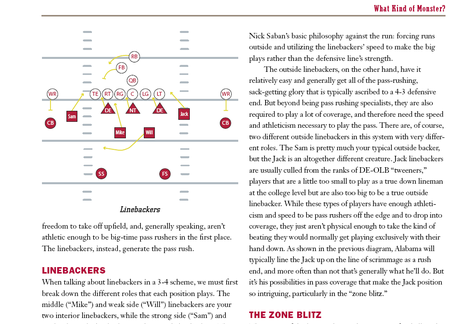 ed.- Since I wasn't able to show a lot of the text that goes along with the diagram above, several astute commentators over at the tidesports forums have noted that the gap on the weakside is open, leaving the defense prone to a counter. The diagram is meant to illustrate the responsibilities of the Mike and Will in run support, i.e. filling any open gaps left by the down linemen. In this diagram, which is a straight power run to the strong (TE) side, the ball is already snapped and the defense has ostensibly read the play and is flowing towards the ball, meaning the Mike fills the open gap on the play side while the Will is left to "scrape" the play. Should they read counter to the weakside, the Will steps up to fill the open gap while the Mike trails or, conversely, if the back sees a cutback in the open A gap on the weakside, either the Will cuts back with him or one of the safeties comes up to make the tackle. Just to clear up any confusion...