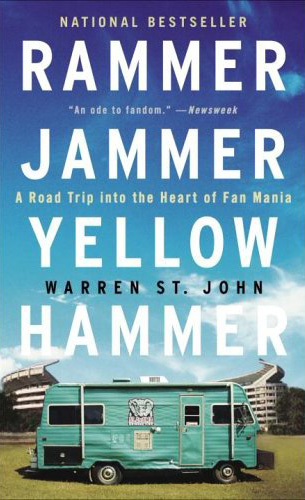 Alabama football often inspires a degree of devotion that can blind one to the fact that the magnificent affliction is a communal one and best experienced as a group activity. We get so caught up with the object of our affection to the point we can miss the true solace the particular devotion can provide.

Which is why Warren St. John’s Rammer Jammer Yellow Hammer stands out among the legion of books penned about Alabama football – it’s really not about Alabama football. Oh sure, all the peculiar hallmarks of Crimson Tide fandom in the fall are present and accounted for – Bama Bombs, the Booth, bitching about Finebaum – but it’s about a lot more than that.

Rammer Jammer Yellow Hammer is by far the best (and perhaps the only) tome devoted to the frenzied masses instead of the beloved football team itself. While is a faithful account of St. John’s experience following a single season of Alabama football it actually depicts the four-month-long odyssey of devotion annually endured by every college football fan (and pretty much any devotee of a major sports team).

There are a thousand sublime moments that those of us subject to the thrall of abject fandom must endure – some ecstatically glorious and some devastatingly terrible. It’s a glorious insanity that we share with even our most hated rivals no matter how much it galls us to admit. Our differences, no matter how wide we like to make them, are actually just of degree.

The simple route to approach this endeavor would have been to treat the subject with ridicule. Snark is certainly popular these days and cynicism isn’t particularly difficult to sell. But that approach wouldn’t get the answers to the questions about ardent fandom St. John is asking; the single most important being, “Why?"

Besides, who among us has not harbored, in their heart of hearts, the dream of traveling from game to game to follow their team over a complete season? Real life and practical obligations make it almost completely impossible to the vast majority of us. But when St. John tells of $5,000 to purchase a beater of a mobile home to do just that – there, but for the Grace of God, go we.

Where St. John really sets himself apart from the pack is with his forthright honesty in depicting the more unsettling aspects of the ardent fan base – racism, alcoholism and flat out ignorance – which our foes delight in casting as the shorthand for all they see as wrong with us. These topics aren't pleasant but  they are real and it's to his credit he depicts them faithfully.

Moreover, Rammer Jammer Yellow Hammer carefully delineates the strange dual nature of the fan base, those that attended the University of Alabama and those that are simply natives of the state, is one of the most adroit and insightful I’ve ever read. It’s one of the things that make Crimson Tide fandom so unique although, all too often, it’s a point we allow to divide us internally.

In many ways, Rammer Jammer Yellow Hammer is a communal act of contrition for permitting one to slide into the delightful mania of Alabama fandom. It’s an annual rite of emotional and spiritual devotion that involves closely following all the highs and lows of the Crimson Tide team.  Its part and parcel of the deal and given the stature of Alabama’s football that the degree of those highs and lows can be dramatic indeed.

But no matter how terrifying a roller coaster ride as it might be, we wouldn’t have it any other way.