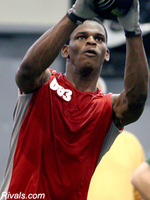 Some great news breaking late this morning, as several published reports are indicating that Michael Bowman has qualified academically, and that he has also been approved by the NCAA Clearinghouse. With his academics good to go, Bowman will arrive in Tuscaloosa shortly for the beginning of the second summer term.

This is huge news, no two ways about it. Our staff was very high on Bowman this past year, and we took a commitment from him despite his academic issues. Bowman is a very big, physical target, and once he arrives on campus he will probably be the closest thing we have to Julio Jones in terms of physical skill set and raw ability. This past year, both Rivals and Scout.com had Bowman as a four-star receiver, with Rivals having him as the #20 receiver in the country, and Scout.com having him as the #14.

With Bowman qualified, we have only two players left on the fence, and they are Darrington Sentimore and Eddie Lacy. Most seemingly feel pretty confident about Sentimore, and the Clearinghouse concerns still linger with Lacy. Either way, though, even if both fail to qualify, that will mean that 24 of the 27 signees in the 2009 class qualified academically, and as a whole that is a very good percentage.