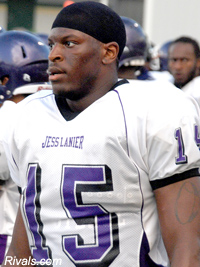 Had the news on this one been broken earlier in the day, I would have put this in the weekly Meat Market. Nevertheless, some late breaking camp news has been coming out, and I decided to give it its own blurb instead of editing the Meat Market post. That said...

Linebacker LaDarius Owens just returned from working out in Tuscaloosa, and suffice it to say things have changed for the Jess Lanier product. Owens' uncle was the first African-American football player ever at Auburn, and he grew up in an Auburn family, thus it has long felt that Owens would likely end up signing with the Tigers. He named them his leader earlier in the year, and the general hope for the Tide (as I've been detailing in the Meat Markets) is that we can just delay his decision for as long as possible, and hope to grab him at the very end, just like we did with lifelong Auburn fan Jerrell Harris two years ago. To be sure, Owens has visited Tuscaloosa unofficially about nine times (literally), but nevertheless the aforementioned remained the prevalent opinion.

However, after taking another trip to Auburn this weekend, Owens worked out in Tuscaloosa at the UA camp the past couple of days with Alabama linebackers coach Sal Sunseri, and suddenly he is singing a completely different tune. He says that Alabama has risen dramatically with him, and now he no longer says that Auburn is his leader. And furthermore, far from making a decision later in the year (which was completely expected by everyone prior to this writer), Owens says he now wants to make a decision before the start of his senior season, and it seems like a decision could be coming in the near future.

Hopefully this means great things for the Tide, and losing Owens like this would be an unbelievable blow to Gene Chizik's recruiting efforts. Of course, it's entirely possible that Owens may commit soon to Auburn, but at the very least he's making plenty of news right now, and his recruitment has been shaken up completely.