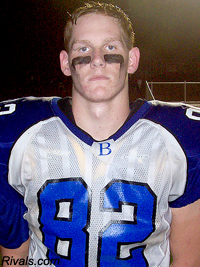 Brian Vogler has just committed to The University of Alabama, doing so at a noon eastern press conference from his high school on Columbus, Georgia. Though this news comes as no surprise to anyone who closely follows recruiting, it is nevertheless big news for the Tide, and yet another big victory on the recruiting trails. Suffice it to say, this one is a pretty big coup for the Tide, given Vogler's obvious abilities, and the fact that coming out of Columbus, Georgia he is a product of a traditional hotbed of Auburn talent.

Vogler was highly recruited by just about every top program in the country. In total, he collected approximately 40 offers, including from the likes of Alabama, Oklahoma, LSU, Tennessee, Florida State, Miami, Auburn, and others, but ultimately selected Alabama over Oklahoma. Rivals has Vogler as a four-star recruit and sixth overall tight end prospect in the country.

Coming in at a massive 6'7 and approximately 250 pounds, Vogler looks to make an immediate impact in Tuscaloosa. We could certainly use his big, physical presence after Colin Peek graduates following the 2009 season, and he should be able to make a legitimate bid for meaningful playing time from the second he steps on campus. Furthermore, Vogler is also a standout on the basketball court as well, and both Alabama and Oklahoma were going to allow him to play for the basketball programs as well. Do not be surprised to see Vogler on the hardwood with new head coach Anthony Grant in the coming years, once football season is over, of course. Also, as a final note, Vogler is a good student in the classroom, and should have no issues qualifying academically.

Brian Vogler becomes the 17th commitment of the 2010 recruiting class.