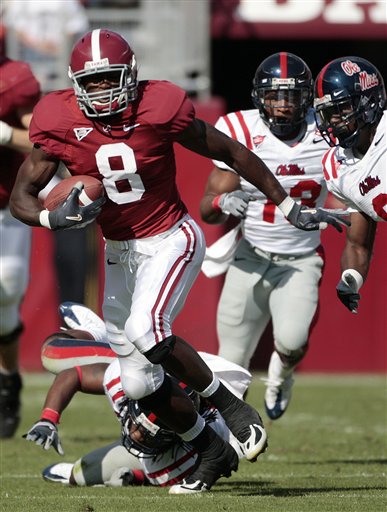 One of only three four unanimous First Team All-SEC picks after his true freshman season, Jones will once again be the primary target of both the Alabama passing attack and opposing defenses. As was previously discussed in the "How Did Julio Steal A.J. Green's Thunder" post, Julio Jones was, quite simply, the Crimson Tide passing game during the 2008 season, and considering his production in a run first offense with very few viable receiving threats surrounding him, it's no wonder he stood out to the coaches.  As impossible as it may seem, he should have an even bigger role in this year's offense:

"We didn't move him around a lot (last year)," Saban said. "I think if we do move him around, it will be a little more difficult for people to double-team him, which is certainly a goal, and he's certainly ready to do that."

Moving him around, though, means other players are going to have to step up and become legitimate receiving threats, something that never really happened last season despite a lot of unrealized potential and practice field heroics.

Take away Julio's production last year and our top three leading receivers would have been Nick Walker (TE), Mike McCoy (WR) and Glen Coffee (RB), with only Walker coming close to Jones in # of receptions (32 to Julio's 58) and yards (324 to Julio's 924).  Without him, there's not a lot to speak of among the remaining receivers, something that has plagued the staff ever since the end of last season.  Talk of needing players to step up and be more consistent has been almost constant, and the need to find someone, anyone, to compliment Julio this season is a must if the Tide offense is going to have the sort of "explosive" element it needs to build on last year's success.

"I think for our receiver core to continue and develop, and have more explosive players, other than Julio Jones," Saban said, "showing consistency in making plays is going to have a lot to do with it."

There's no real backup plan to replace Julio, but there are some options as far as mitigating the loss goes.  Alabama's offense is more than likely going to be centered around the running game once again, and, if last year is any indication, our passing philosophy should continue somewhere along the lines of " throw when we want to, not because we have to."  Thankfully that worked out pretty well for us last year, but last year we had a veteran offensive line, possibly the best overall line the Tide has fielded this century.  This year we've got three new faces and are looking to find a workhorse back to fill Glenn Coffee's shoes, so there is a real possibility we may find ourselves in a position to "have" to throw from time to time. Should that be the case, there are at least four candidates that should get the lion's share of those needed throws; Marquis Maze, Mike McCoy, Colin Peek, and Darius Hanks.  None of them is necessarily a suitable substitue, but each has something Julio brings to the table (Maze has the deep speed and ability to get open, McCoy is a big target that can make catches in traffic, Peek is physical over the middle, and Hanks....well, he's a practice field hero and is bound to do something eventually) and if the consistency finally shows up, simply spreading the ball around in Julio's absence should be enough to keep the offense moving.