With two big additions coming to the 2010 recruiting class last week in Brian Vogler and Corey Grant, the Tide's 2010 class is now up to 18 commitments, and that number does not include two possible re-signees in Devonta Bolton and Brandon Lewis. It's hard to see Alabama having room for any more than 25 or 26 players in this class, and that means we probably only have room for about seven or eight commitments from here on out, even though National Signing Day is still more than five months away. All in all, it figures to make for the slowest pre-NSD recruiting stretch that the Tide has seen in ages, if not ever, but the lack of drama notwithstanding, it's really a positive development for the Tide. With the 2010 class all but signed, sealed, and delivered, the staff can now start focusing more attention on landing another stellar class in 2011.

The biggest news of the past week has been generated by LaDarius Owens, the linebacker from Jess Lanier. He came out of nowhere and said he planned to announce his decision this Friday (July 31st), but later in the week he reneged on that statement, saying that he did not know yet where he wanted to go. At this point, a decision could come at any time. The smart money was clearly on Auburn with the early announcement, but now that he has pushed things back it's really hard to say. Some have wondered (including, to a degree, myself) whether or not Owens is running the risk of waiting too long, and while I do not think you should downplay that as a legitimate possibility, it should be pointed out that apparently Victor Beasley is going to wait until around December to decide, while C.J. Mosley may very well go all the way to National Signing Day. As a result, Owens can probably wait for a few more months without it hurting his chances with the Tide. All in all, though, it's hard to predict exactly how this one will play out. I may come off as a crimson homer, but my honest take on this one is that Owens knows Alabama is the best place for him, he'll win more games here, and he'll increase his chances of playing in the NFL at Alabama. On the other hand, his heart is obviously in Auburn, no question about that. Where will he end up? Your guess is as good as mine.

The other big news of the week came when we learned that Coach Saban and company gave an offer to quarterback prospect Michael Strauss. Currently a Tulane commitment, Strauss is a 6'3 and approximately 210 pound quarterback prospect out of Miami's Gulliver Prep. He is playing at a relatively low level of competition, but he posted very good production last year, completing over 70% of his passes, throwing for over 3,000 yards, all the while throwing three times as many touchdowns as interceptions. He seems like a solid prospect with good physical tools, and hopefully we can get him. The offer we gave him was a greyshirt offer -- thus, for all intents and purposes, making him a 2011 player -- and I think it's probably a good move by our staff.  We'll probably struggle to recruit a top quarterback prospect next year anyway, with the Big Three on campus, so why not just go out and find a kid in the 2010 class that you like, that has the ability needed to play the position, and then give him several years to develop? It sounds like a smart move on our staff's part, and hopefully Strauss will take them up on their offer.

Meanwhile, things continue to get worse with John Fulton. After having things trend in the wrong direction for a few weeks now, Fulton visited South Carolina the other day and emerged from the visit with South Carolina as his leader. He later made it out to be not that big of a deal, saying that Alabama was clearly still in the race and that he did not look to make a final decision for several more months. Moreover, it will help that South Carolina should have their typical middling-at-best season in 2009. As a result, the Tide is still clearly in the thick of things here. On the other hand, all of the recent news regarding Fulton has to remain discouraging as can be. 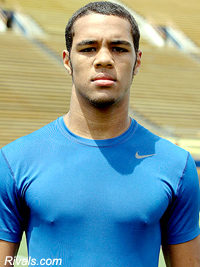 On the positive side, things continue to look good for Keenan Allen. According to his recent quotes, Alabama is recruiting him as a wide receiver, and he still looks to make a decision before the season starts, with Alabama admittedly still in the lead for his services. That should end well for the Tide, especially since Allen has no more visits planned (to my knowledge) to either Cal or Clemson. Hopefully we will add a commitment from Allen in the near future. It should be noted that he is currently on pace to be a five-star prospect with Rivals.

And speaking of Keenan Allen and five-star prospects, keep your eye on Gabe King. He is Allen's teammate, and he recently came with Allen to Tuscaloosa for an unofficial visit, and he came away raving about his visit. He still has Cal on top, but Alabama is surging up his board (he says we're second overall right now), and if we get Allen as expected, that could portend great things for our chances with Gabe King. I know that the defensive line is not a major priority in this class, but it would still be great if we can add a five-star defensive end from an area outside of Alabama's traditional recruiting hotbeds.

Markeith Ambles committed to Tennessee a couple of days ago, finally ending his very mysterious recruitment. Alabama was on his radar screen at one point, but according to Andrew Bone we backed off of him. USC pulled their offer, and the same goes for the Under-Armour All-American Game as well. Florida was his leader, and he did attend their Friday Night Lights camp last week, where many thought he would commit to Florida, but a few days later he ended up at Tennessee. The general speculation is that the Gators would not take his commitment, and as a result he ended up going to Knoxville, which sounds about right to me. I'll be honest, I'm glad we steered clear of him. He clearly has elite talent, no doubt there, but by the same token there is clearly more going on here than we know about.

Obviously it's a slow week here at the Meat Market, so as a final note I'll include this little gem on a comedic note. As we all know, the Gene Chizik recruiting machine is running at full song down at Auburn, complete with magnetized limos, pie eating contests, and interstate billboards. And, of course, despite that, Chizik and company have managed no real success against Alabama on the recruiting trails, but of course the Kool-Aid drinking homers have to spin it that Chizik has completely changed the recruiting dynamic for both schools. As a result, supposedly Auburn has gotten a lot of kids this year with legitimate Alabama offers, like Jeremy Richardson, Jawara White, D.J. Howard, and others. The more paranoid of conspiracy theorists have it that when Alabama loses out on recruits, the recruiting services then go back and retroactively remove their Alabama offer. Well, recently this all came to a head with the recent commitment of defensive tackle Kenneth Carter to Auburn on Monday. He, of course, did not have an Alabama offer, but that did not stop the Kool-Aid drinkers from trying to spin it that way. In fact, the Auburn Rivals site even added a little footnote to their commitment story on him claiming that he did have a firm offer from Alabama (click here for a screenshot). Of course, Rivals itself quickly found about it and forced them to remove it from the article. Go read that article now and, big shock, it has been deleted. My bet? Auburn doesn't sign a kid this year who doesn't have an offer from Alabama. They might sign a blind, crippled midget with 1.4 core GPA and a six on the ACT, but ten bucks says he too will have a 'Bama offer.

ed.- Andrew Bone chimed in on the funny over in the TideSports.com message boards:

Also to let facts be known-neither Richardson, Howard or Carter had offers from Alabama. Jawara White was the only recruit that had an offer from the Tide.

Terrance Broadway committed to Houston. Caleb Castille may very well end up at Auburn, who is seemingly considering giving him a firm offer. All things still look good with Harrison Jones. Eddie Lacy and Darrington Sentimore should hear something official from the Clearinghouse this week. Kyle Prater still hopes to visit 'Bama before the season start. Alabama apparently did not make the cut for Jeff Luc. Lamarcus Joyner is still considering Alabama.