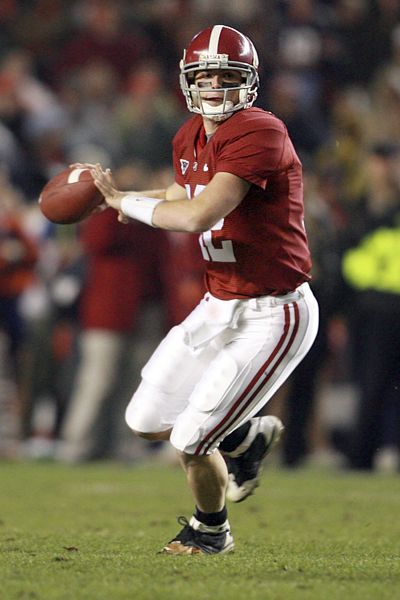 We've come to the end of the list, and as many of you have guessed already the person we can least afford to lose to injury is QB Greg McElroy. It may seem strange to think that an untested, first year starter is the most important cog in the machine, but consider these three factors:

1. The Offense Will Only Go As Far as McElroy Can Take It

Last year with John Parker Wilson we watched and Alabama offense that could be brutally efficient with a safe mix of a dominating ground attack and the ability to pass on our own terms, but a large part of that success was centered around an offensive line stocked with veteran experience and leadership that was able to play as a cohesive unit throughout (much) of the season.  It was the best overall line we have fielded this century and let us get away with some very unimaginitive play calling because we didn't need to do anything fancy.  We were able to run the ball straight down opponents' throats over and over again while depending on a solid defense to make sure the "explosive" spark we sorely lacked never became an issue....until Florida and Utah put us in a position to need scores and need scores quickly.  Sadly, those scores were unattainable, and that is the kind of situation we may find ourselves in a little more frequently than we would like this coming season.  Though the talent is there to replicate last year's line play, fielding the right five guys in the right grouping and getting them to gel quickly is something we all better be on our knees praying about every single night for the next 36 days, and while we're down there it wouldn't be a bad idea to say a few prayers that the right five guys in the right grouping manage to stay healthy all season long as well.

Bringing it back to McElroy, with an uncertain line, we will have to depend on McElroy's understanding of the offense and game management skills to keep us out of bad situations, i.e. turnovers and negative plays that put our defense in a hole and set up their offense with favorable field position.  If we can pound the ball as successfuly as we did last year, then throwing at our pleasure becomes another great luxury, one that McElroy should be perfectly capable of exploiting.  But if we aren't quite as dominant on the ground, or if we find ourselves in an unfortunate "we gotta score on this drive or it's over" situation, every receiver on the roster can step up all they want...if McElroy can't get them the ball, it won't matter.

Though Star Jackson has the athletic ability and raw talent to likely become a solid QB in the future and A.J. McCarron is already drawing big time praise from his teammates, the likeliest scenario to replace an injured McElroy is walk on Thomas Darrah. Darrah took the lion's share of snaps with the second team offense on A-Day and, while not spectacular, didn't do anything to embarass himself while Jackson, on the other hand, was going 4 for 13 with two picks.  Darrah has been around longer, he knows the system better, and has taken actual game snaps (admittedly during junk time).  But he's still a walk on, and he's still a walk on for a reason.  Let the notion that our season may wind up on his shoulders sink in for a minute.

3. McElroy Has Already Assumed a Leadership Role On the Team

Though McElroy has only been in charge of the huddle for a brief time, his teammates, on both sides of the ball, have already embraced him as a leader. The offense returns only four starters, so there will be growing pains. But as corner back/return specialist Javier Arenas says, "Seeing him this spring, gave me a relaxing type of feeling that we're going to be alright. He put everyone's mind at ease."

From that same article Saban himself is high on his praise of young McElroy, saying he i:

"pleased with..his improvement, his leadership, his game management, all the things he's done in his part of it. He's an extremely bright guy. He's got really good character and he's a great role model. He has the personality to affect other people around him so from an intangible standpoint, he's A plus and he sort of plays quarterback that way too. He anticipates what's happening because he's bright and he's got good natural instincts and anticipation of what to do. He may not be the A No. 1 most talented guy but he certainly has enough ability to make every play he needs to make. Because of his intangibles, his anticipation, his understanding, he's very capable of being very good at his position."

He dreams big and wears storied No. 12 for his dad, who loved Joe Namath. McElroy was not satisfied with last year's 12-2 season. When asked whether it helped restore some of the program's storied tradition and legacy, he is resolute. "I mean, what have we done? We haven't won a championship. In the three years I've been here all we've won is the PetroSun Independence Bowl. We haven't won anything. We're proud of where we've gotten this team to but until we come home with a crystal ball or a significant trophy and something to be proud of, with all due respect to the Independence Bowl, we want to go to the absolute top. If you talk to most of our fans, without an SEC championship or national championship the season can't be deemed a complete success. That's the attitude we want to establish around here."

Talk like that endears him to a fanbase before the season, certainly, but until he delivers the goods it's just that...talk.  Thankfully he has the knowledge of the offense, the emerging skill players around him, and an excellent coaching staff around him to help him succeed.