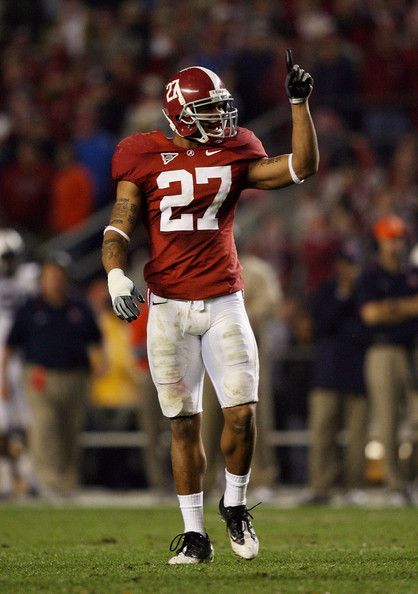 This may seem like a strange choice since Woodall hasn't really been a "star" at Alabama so far, but Woodall was sort of the quiet workhorse of the secondary last season. He leads the returning DBs in INTs with four and is second behind Kareem Jackson in pass breakups with eight (to Kareem's 10), and was just generally a very solid strong safety, a hard hitter that was comfortable playing near the line in run support and also effective in pass coverage.

Looking around at the rest of the DBs, there are quality backup options at each position: Marquis Johnson, Chris Rogers, Alonzo Lawrence, Robert Lester, and B.J. Scott can all fill in at CB in a pinch, and despite the emergence of Robby Green at FS Ali Sharrief has seen plenty of quality snaps at safety and could rotate with Green (if not overtake him for the start come fall) like he did with Johnson. At strong safety though, Mark Barron is pretty much it behind Woodall and even though Barron is going to be a monster in his own time, I'm very uncomfortable with the notion of two young players like Barron and Green out there, especially considering the safeties are responsible for so much in the pass defense. Further, Woodall really improved his grasp of the defense before last season after effectively sitting out the '07 season while he struggled to learn the schemes, and his knowledge of the schemes and proper alignments will be key in filling Rashad Johnson's play calling shoes in the secondary.

Finally, one more thought on Woodall's importance. Though losing either Arenas or Jackson to injury would certainly hurt us at CB, we have guys that can step in well enough that it wouldn't be a devastating blow to the defense. Part of that has to do with the fact that we have two safeties that can nominally take up the slack; Woodall and hopefully Green (Sharrief is also available and experienced). Should we lose Woodall, suddenly everything else becomes a little too vulnerable, plus it takes away some of the corner blitzes and other coverages that we could normally use by forcing the more experienced CBs to play deeper than they may normally feel comfortable with to help keep an inexperienced safety from giving up the big play over the top.

Mark Barron is the obvious choice here after seeing time in all fourteen games last year and recording eighteen tackles, generally from the "Money" position.  Barron and Woodall have similar builds (both 6'2", about 220ish) and skill sets, but it's Woodall's experience and grasp of the defense that Barron would have a tough time replicating in his place.  There is also the possibility that Ali Sharrief, who many (including myself) thought was the heir apparent to Rashad Johnson, would step in.  He has the game experience that Barron lacks, though he's listend at 5'9", 205 lbs and isn't the same kind of physical presence near the line that both Woodall and Barron are.