With sixteen commitments already in the bag, not to mention the possibility of re-signing Devonta Bolton and Brandon Lewis, we should all be getting ready for recruiting to start going very slow. Even though we are still six months from National Signing Day, we probably only have about ten spots left in the 2010 class, so you can do the basic math. Assuming that a couple of guys will wait until National Signing Day to announce, that is effectively going to have us averaging about one commitment per month from here on out. Bottom line, space is extremely limited at this point, and news on the recruiting front is really going to start to slow down for the Tide.

With things slowing down a bit on the 2010 class, all eyes have focused on the academic situation of the 2009 class. Fortunately with the good news received by Michael Bowman, at the very least 24 of the 27 signees from the 2009 class will qualify academically. Both Eddie Lacy and Darrington Sentimore are still on the fence, and we will not find out about those guys for a few more weeks. This is all speculation on my part, but I think the smart money is probably on Sentimore making it with Lacy coming up short, but keep in mind that is purely speculation and anything can happen. 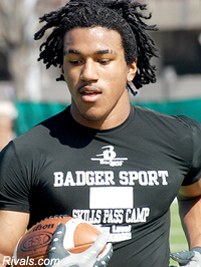 Moving back to the 2010 class, definitely keep your eye on Victor Beasley. He's not rated very highly by either Scout.com or Rivals right now, but you can rest assured that his stock is about to take off like it's being shot out of a cannon. Max Emfinger, for example, recently ranked him as the #2 prospect in the country, ahead of the likes of Seantral Henderson (OT) and Marcus Lattimore (RB). We still have a big lead for Beasley, and hopefully we can wrap him up in the next few weeks. If not, you can just get ready for it right now... we're going to have one hell of a fight on our hands. We were just the first elite recruiting powerhouse to coming knocking on his door, but rest assured we won't be the last. 6'5 kids who can run a 4.50 in the 40, while sporting a 3.7 GPA while doing honors course work do not stay hidden too long.

The rumblings on Corey Grant have been pretty positive for the Tide as of late. Obviously we do not have any firm news as of right now, but hopefully Grant will commit to the Tide in the coming days. As was the case in the last Meat Market, it looks like that if Grant does not make a decision soon, we are probably going to be waiting for a good while to hear exactly where he is going.

Speaking of the last Meat Market, I said then that the commitment of Deion Belue could put the status of Garry Peters in jeopardy, and that indeed turned out to be the case. After having the Tide as his big leader for months, Peters recently did a 180, and now he has Clemson way out front, and it is widely expecting that he will commit to the Tigers in the coming weeks. It does not take a recruiting expert to figure out what happened with this one... Belue came on strong, and his commitment took Peters' spot, and now Peters is having to look elsewhere. Either Peters never had a commitable offer or he simply waited too long... at any rate the Tide moved on without him.

Furthermore, speaking of prospects possibly being left out in the cold, chew on the possibility of this one... Keenan Allen. The general consensus -- and growing consensus -- is that we can get Allen if we really want him, though we'll have to put up a hard fight to get him. But do we want him? The easy answer is yes, given the fact that he is a highly-rated four-star recruit. On the other hand, exactly where does he fit in? His natural position is safety, but we've already gotten two safeties there, and we've probably got several players ahead of him at wide receiver. Corner is a possibility, but as we see with Peters we already have a squeeze there, and he would likely be playing out of position. Don't get me wrong, I think we'll probably end up making room for Allen simply because I think he's too good to pass over, but admittedly I do think he is a bit borderline at this point.

And speaking of the numbers crunch at cornerback and wide receiver, the real linchpin to those two situations is Blake Sims. The versatile athlete was initially expected to stay in the defensive backfield, likely at corner, but he has been playing wide receiver in camps recently, and apparently that is where he wants to play. Depending on which side of the ball he ends up on, that really limits the space left. The consensus is that we take no more than four wide receivers or four cornerbacks, and with Sims at wide receiver, we have only one spot left there, and if he stays at cornerback, we have only one spot left there, and that would go to John Fulton.

LaDarius Owens has made some positive news for the Tide as of late. As I previously said, we really need to have him postpone his decision as long as possible, and now it looks like he will not be deciding before the season starts. Auburn is still his clear leader, but we are staying alive. And, interestingly enough, Owens recently said in an interview that the schools recruiting him the hardest were Alabama, Tennessee, and LSU. No mention of Auburn. Given the Tigers' great need for Owens, that struck me as really odd. You can make plenty of valid criticisms against Chizik and company, but a lack of energy and intensity on the recruiting trails certainly isn't one of them. Perhaps they feel they have Owens in the bag? I do find it to be a bit of a mistake to not be going after him as hard as others, given how badly they need him.They will probably get him regardless, but I see no reason to be taking chances.

C.J. Mosley continues to be as tight-lipped as ever, but at the same time he is still almost unanimously expected to end up at Alabama. At this point, you simply have to think that this is a situation of where a prospect is being publicly tight-lipped, but is privately making it somewhat well known as to where he is likely to end up. It looks like we are going to have to wait a while on Mosley, but even so it seems like he will nevertheless end up in crimson.

An interesting prospect to keep your eye on is Shon Coleman. Currently committed to Auburn, Coleman is a mammouth offensive lineman out of Olive Branch, and he does have an offer from Alabama. On the other hand, it's hard to see exactly where he falls on our board. We will be saving a spot for Coleman's teammate, Damien Robinson, but we will likely take at least one more offensive lineman, and there are several other linemen on the board. Coleman would likely be a pure guard at Alabama, where at Auburn he'd probably have a shot at left tackle, but still a lot of people are confident that we can flip Coleman if we put on the full court press for him. Again, though, it's really a question of just how high of a priority he is for the Tide. Time will tell, but for now keep your eye on him as a possibility.

On a more general note, I must say that it is really surprising just how little talent the city of Birmingham is turning out these days. Years ago, the city of Birmingham turned out an unbelievable amount of elite talent, and schools from all over the SEC fought hard to try to tap the city's prep pipeline. But, of course, the times have really changed. The past three years combined, Alabama has signed only three players out of Birmingham, and it's not like we are missing on talented kids... the talent is simply not there to begin with, and what little talent there is has almost wholly shifted out to the 'burbs. Thirty or forty years ago, Birmingham would often times turn out 15-20 legitimate Division 1-A prospects a year, if not more, and now it would take much longer than one year to turn out that many prospects of that caliber. What can you say? The pipeline is almost bone dry, and what little talent is left is generally, with a few exceptions, more of the middling variety, not the elite kind.

Finally, a few quick hitters to close things out...

Delvin Jones has Alabama in his top three now, but it would be a major surprise to see the Tide get him. Jonathon McKnight is very high on the Tide, but I would be surprised to see him ever get a firm offer from 'Bama. Alabama legacies Maudrecas Humphrey (Bobby Humphrey) and Caleb Castille (Jeremiah Castille) will not end up with the Tide; Humphrey is an SEC caliber player who will end up somewhere in the conference, but he will not get a firm offer from the Tide, and Castille does not seem to be a legitimate SEC caliber prospect. There are more than a few rumblings that Harrison Jones will pull the trigger in the next couple of weeks, but nothing definite yet. Michael Dyer added Alabama back to his list of favorites, but don't expect him to end up in Tuscaloosa; expect him to be a drama queen who drags it out to the very end. Jakar Hamilton will commit to UGA in the next couple of days. Kaleb Eulls committed to Mississippi State. A consensus is growing that, despite many other schools in contention, it's ultimately an Alabama v. Mississippi State battle for Vincent Sanders.