A Tale of Two Halfs: Alabama vs Missouri 1978

Share All sharing options for: A Tale of Two Halfs: Alabama vs Missouri 1978 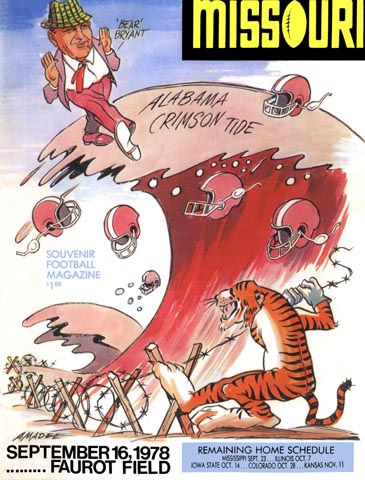 Alabama and Missouri have faced each other on the gridiron just three times and on two of those occasions the Tigers have proven victorious. Over the course of this off-season SB Nation blog, Rock M Nation, has run a contest to determine The Greatest Win in Missou History and the two wins over Alabama are currently facing off in the quarter-finals.

(Reliving past victories over Alabama is kind of an off-season blogger staple but RMN has done a superb job with this effort.)

So while the 35-10 loss to Missouri in the 1968 Gator Bowl and the 20-7 Tiger victory in the 1975 season opener are important to remember so is the 1978 contest between these two storied football teams. And thus, in the sake of equal time, we look back at the"Tale of Two Halfs" – the Alabama / Missouri game from 1978.

On Sept. 16, 1978, Coach Bryant and his players traveled to Colombia, Missouri to face the Tigers. Almost 74,000 fans packed into a sweltering hot Faurot Field to witness the contest (the mercury climbed into the 90s by game time). Missouri was riding high coming into the game. The week prior they had shocked defending national champion Notre Dame 3-0 in the season opener and were sitting pretty at No. 11 in the rankings.

Coming into the game Alabama was the No. 1 team in the country but it was working hard to keep that ranking. The 1978 schedule was insanely front ended with the Tide having already faced No. 10 Nebraska and were slated to go up against No. 7 USC the week following the tangle with the Tigers.

"Typically, Alabama teams got stronger as the year went along," noted running back Major Ogilvie. "In 1978 we had to be pretty good from the get-go."

Moreover, there was some serious bad blood here. The 1975 opening day loss to Missou was the only defeat the Crimson Tide suffered that season but it was enough to cost Alabama a chance at the National Championship. Barry Switzer’s Oklahoma team pulled out the win against the Tigers and went on to claim the trophy.

The 1968 loss in the Gator Bowl probably didn’t sit well on Coach Bryant’s mind either. As RMN points out, the two losses had led to talk of a "Bear Jinx" against Missou leading up to the '78 contest.

Alabama started the game white hot. On it’s first possession the Tide used it's potent wishbone offense to drive 71 yards in six plays. A  23-yard run by Ogilvie put Alabama on the scoreboard.  Another touchdown followed quickly and a 26-yard field goal by Alan McElroy gave Bama a 17 point lead. The game seemed to be in the bag but Missouri had other plans.

Midway through the second quarter, the Tigers put together a 72-yard touchdown drive and on the second play of their next possession Missou QB Phil Bradley ran 69 yards for another score. Things then went from bad to worse for the Crimson Tide.

When Bama got the ball back Tiger cornerback Russ Calabrese snagged a Jeff Rutledge pass and dashed 30 yards into the Alabama end zone. The pick snapped the quarterback’s then-school record of 100-straight passes sans interception and gave Missouri the lead going into halftime.

The 20 points racked up by the Tigers was the most points scored in a single quarter against a Bryant-led team in nine years and brought back ugly memories of the 1975 contest. According to player accounts, Coach Bryant’s address to his team during the interim was… lively. And, as it proved, effective. Alabama came out of the locker room fired up and promptly took control of the contest.

After receiving the ball to start the second half, Missouri fought its way to the Alabama 48 before being forced to punt. The Tiger’s punter, Monte Montgomery, had barely got the kick off when sophomore defensive end E.J. Junior leaped in front of it. The ball bounced off his chest and Tide linebacker Rickey Gilliand scooped it up and scampered 35 yards for the touchdown that put Alabama ahead.

"The momentum was definitely going their way, and we had to do something," Junior said following the game. "Our defense is supposed to be better than the offense so it was up to us."

The defense kept the pressure on forcing two more Missouri turnovers that the Crimson Tide offense promptly translated into more points to put the game completely out of reach.

Despite the abysmal second quarter, the Bama defense came through spectacularly. The Tigers were held to just five completions the fewest for any team facing the Tide in ‘78. Defensive tackle Marty Lyons had a monster day racking up 17 tackles, the most by any player in a single game the entire season.

Special teams also shined. In addition to the blocked punt, at one point punter Woody Umphrey boomed a 56 yarder – his longest of the season – to pin the Tigers way back in their own territory.

Most importantly, the close call in the second quarter served as a key wake-up call for the Crimson Tide.

"This took us off our cloud," Lyons said following the game. "It let us know that anybody can beat us if we let them. We’re capable of being the No. 1 team in the country – but we’ve got a long way to go."

And eventually, they made it. Alabama went on to face Penn State in the Sugar Bowl. The lesson of the Missouri game helped Alabama battle to a hard-fought 14-7 victory in New Orleans earned Alabama its 10th National Championship.

While the "goal line stand" against Penn State has become synonymous with Alabama's 1978 National Championship, E.J. Junior's block of Missouri's punt that September afternoon was the play that allowed the Crimson Tide to get there.

"It was the turning point of the year," linebacker Barry Krauss recalled later. "We knew we could come back. We thought we could beat anyone, anywhere. It was a big moment in a big game."