Coach Saban on the First Scrimmage

Share All sharing options for: Coach Saban on the First Scrimmage 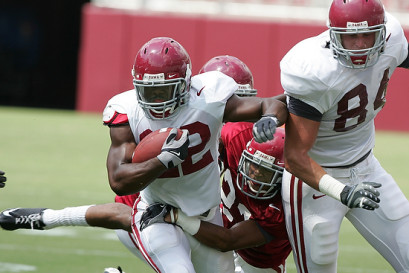 Nothing major here, but I just figured it would be a good idea to compile some of the quotes that Saban had after the first scrimmage today. These come from a variety of reports, such as the official release on RollTide.com, the 'Bama Beat blog of Gentry Estes, and the write-up at 'BamaOnline, among others:

"I was really pleased with the way the first offense executed. They moved the ball effectively and went down and missed a field goal on the first drive. The second drive we went down a scored a touchdown. From a quarterback standpoint, Greg McElroy clearly showed poise out there and moved the team effectively."

"Greg McElroy clearly showed poise, did a nice job out there today, moved the team effectively. For the most part Greg did a really good job in the red zone, moved the field, all those types of things."

"I thought Star Jackson did a decent job today, showed some command and leadership in what he was doing."

"Barrett Jones played there [at right guard] today, he's been doing the best job to this point, but we've got a lot of competition at a lot of positions. I don't know what five guys are going to end up playing in the offensive line. I really don't."

"Trent Richardson is really a good running back, but he didn't really play with the first team today. I'm sure if he did he would have played better."

"Julio had some big plays out there."

"I thought the first team defense played pretty well after they got settled down. The defense was pretty good on third down, I don’t think they allowed many (conversions) in that situation."

"AJ McCarron has showed some potential as a young quarterback. If we would have played him with the best receivers we have, he probably would have had a better chance to show some efficiency and effectiveness."

All in all, some pretty good stuff from our beloved Nicktator. In particular, I found the quote regarding Trent Richardson to be particularly intriguing. First and foremost, it's very rare to see Saban put that kind of praise on any player, much less a freshman who has all of ten days of practice under his belt. More to the point, though, it seems to me like he is effectively saying that Richardson played well, but was hampered by a subpar showing with the second (or third) group of offensive linemen. Put that together with the aforementioned quote about players moving around next week, I wouldn't be all that surprised if Richardson makes a much bigger impact next week. Ditto goes for AJ McCarron, who Saban spoke of in very much the same fashion.