Looking Around The SEC West

Share All sharing options for: Looking Around The SEC West

Just a bit of a blurb post here, but here goes a few random thoughts from looking around the SEC West: 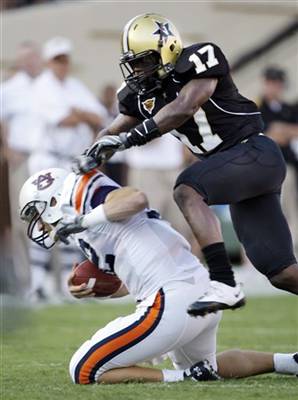 Auburn: Perhaps the biggest news of the past couple of days is that Auburn has named Chris Todd their starting quarterback for the 2009 season. Most thought Todd's chances of playing time left with Tony Franklin, but after undergoing successful shoulder surgery this Spring, the senior has surprised many by grabbing the starting job. Of course, though, there is plenty here for a cynic to pick over. Todd missed all of Spring practice, but nevertheless he comes into Fall practice and wins the starting job in basically a week? On the surface, that seemingly says more about the shortcomings of the other quarterbacks on the roster than it does about Todd's own abilities. Now, I will say that, if he remains healthy -- and given the complete lack of depth up front, that could be a huge if -- Todd may very well turn out to be a fairly decent quarterback for Auburn, but again it's hard to paint over what this entails for the rest of the quarterbacks on the roster. At the very least, I think you can write "recruiting busts" beside the names of Neil Caudle and Kodi Burns. Perhaps Burns can make something work as a wide receiver / wildcat option, but he's clearly never going to be the high-end every-down quarterback many Auburn fans thought he would when they signed him out of Arkansas. I imagine Rollison wins the back-up job as a true freshman, and if Todd struggles down the stretch, he will probably start to see playing time. Either way, it's his team in 2010 and beyond.

Ole Miss: For the life of me, I will never understand the hype surrounding the Rebels. They have the exact same questions Alabama does on the offensive line, except that they have many more questions in the defensive back seven, and they have much less talent and quality depth to fill those holes than either does Alabama or LSU. Furthermore, Greg Hardy continues to be hampered by his foot injury, which was recently aggravated after he wrecked his Escalade (insert obligatory eye roll here), Bobby Massie is just now getting on campus, Jamar Hornsby has been sent packing, and Tig Barksdale has spent more time in court the past week than on the practice field. Oh sure they have Jevan Snead, but let's be precise here... he had a good but not great year in 2008, and the offensive line protecting him will not be as good in 2009. And yet he's supposedly going to carry the entire team to Atlanta and beyond? Moreover, the two key games against Alabama and LSU are in Oxford, but I think it's clear that actual value of home-field advantage is, at the very least, greatly overstated and the actual impact is quite small, if existent at all.  And, of course, making matters worse, Houston Nutt teams have never played particularly well when surrounded with a lot of hype. I'll say it now... there is no way this team is going to live up to the hype, period. I feel confident in saying that, four months from now, we can frame that recent SI cover right alongside that "'Bama Is Back" cover from 2005.

Arkansas: I'm obviously not to high on Johnny Reb, but I will readily admit that Arkansas scares me quite a bit. Bobby Petrino built a very productive offense last year out of a terrible collection of talent, and he'll get a big upgrade in raw talent in 2009. Ryan Mallett should thrive in Petrino's scheme, and the backfield is suddenly loaded with talent. If this team can find any semblance whatsoever of a functional defense, it's going to make for a very daunting opponent. And let's be honest, this team wasn't necessarily that bad a year ago. They knocked off Auburn and LSU, and came within a hair of beating Ole Miss. Furthermore, the Alabama game was a lot closer than you probably remember... it was an evenly played game sans four huge plays that went the Tide's way that created a 28-point swing (Coffee's touchdown run, Dick's two interception returns for touchdowns, and the goal line stand before halftime). Bottom line, this team will probably be pretty difficult in 2009. I imagine they beat Auburn again, and they should pull an upset over another big SEC team as well. It's not out of the realm of possibility that they could get us. At the very least, I imagine our contest with them will be much more reminiscent of what we saw in 2006 and 2007 than what we saw in 2008.

LSU: The Bayou Bengals are clearly the most intriguing and unpredictable team going into the 2009 season. They have the talent to be a national title contender, and once again the schedule is filled with creampuffs to the point that seven wins is effectively a birthright. Moreover, the addition of John Chavis as defensive coordinator -- though it's a move I don't like long-term -- is clearly a big upgrade over the two bumbling idiots they had a year ago. On the other hand, they still have a lot of question marks at the quarterback position, a couple of big holes to fill on the offensive line, and quite a few other question marks as well. Furthermore, the Tigers have led the SEC by a wide margin in fumble luck the past two years, and it's only a matter of time before we see some serious regression to the mean in that department. All in all, I have no idea exactly what these guys are going to do, and frankly I don't think anyone else does either. Talking with any certainty about their upcoming season, to me, is more of an exercise in ignorance than in expertise. If I had to say, I'd say they could go anywhere from 7-5 to 11-1, and I'd give them approximately a twenty-percent chance of each particular outcome along that spectrum.

Mississippi State: I like Dan Mullen quite a bit as both a person and as a coach, and frankly I think you have to be a real bastard to hold anything in particular against the traditionally hapless Bullies. But with that in mind, when I look at this I still get the feeling that this is the stereotypical case of a rising assistant jumping on the first major head coaching offer he receives, regardless of how poor of a fit it may be and regardless of how difficult the path is moving forward. Truth be told, MSU is an impossible situation, and just getting them to play at a respectable level is a daunting task in its own right. They have no tradition to speak of, a relatively small talent base to pick from (and one that is generally picked clean by out-of-state programs and Ole Miss), the facilities are far behind the top SEC programs, Starkville is a one-horse town, and MSU as a university is nothing overly special. And making matters worse, the existing roster at Mississippi State is a very poor fit for Mullen's spread option offense, and getting the right pieces in place will take years. Now again, why did Mullen take this job? He could have stayed at Florida, their offense would have racked up another kajillion points, probably won another national title, and he would have been an even more impressive candidate on the open market. I hope it works out for Mullen and MSU, mind you, but I just cannot help but think that is just another example of a rising assistant jumping on the first big-time head coaching job he is offered.