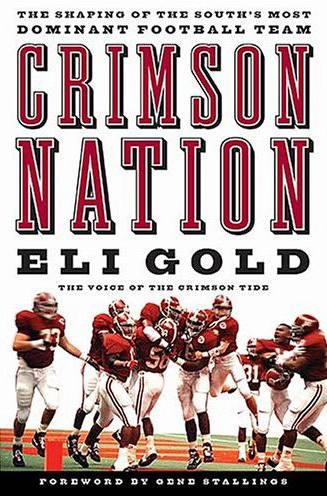 Eli Gold, as most every Alabama fan is aware, has been the voice of Crimson Tide football for two decades. The sound of his voice has become an intimate part of the gameday experience and, as such, his stature among the fanbase is notable.

In 2005, Gold published a book on Alabama football, Crimson Nation; The Shaping of the South’s Most Dominant Football Team that is a classic overview of Alabama’s gridiron history. The book has become one of the better-known tomes on the storied program and for good reason. Gold didn’t out to re-invent the wheel here. His plan was to give folks what they wanted and, in this respect, the book is a resounding success.

Crimson Nation touches all the necessary historic bases – the 1926 Rose Bowl, coaches Wallace Wade and Frank Thomas as well as a nice history of the Iron Bowl and the Third Saturday in October. The era of Coach Bryant, as you might expect, gets particular attention with chapters on the ’61 and ’78 championships, the integration of the team and the introduction of the wishbone offense in ’71 that revitalized the fortunes of both the coach and the program.

Yet, this isn’t great literature by any means. Crimson Nation shows clearly that Gold has a writing style made for radio. It’s almost as if he was trying to emulate a writing style he thought sportswriters were supposed to use.

As well as an abundance of exclamation points!

And are rhetorical questions really an effective narrative device?

Style aside, while I am more than willing to grant a writer a certain amount of leeway in terms of summarization of events due to the restrictions of copy, that does not extend to the propagation of blatant inaccuracies. And there are a couple of pretty egregious examples in this book.

The most obvious is the blasé dismissal of Coach Xen Scott’s experience upon being hired by President Hutchenson Denny in 1918:

“The decision was controversial at first, mainly because Scott had never coached before," Gold writes. "He was a horseracing writer from Cleveland! Apparently President  Denny thought he could coach!"

That would be flat-out wrong. While Scott was a sportswriter for the Cleveland Plain Dealer (a job he returned to after leaving Alabama in 1922) he was also a very successful coach at a number of Ohio schools.

Moreover, when President Denny tapped him for the Alabama job, Scott was nationally known for leading the Cleveland Naval Reserves on a single-season run of victories in 1918. A truly impressive collection of wins that included the defeat of Pop Warner’s University of Pittsburgh squad – a team that had gone unbeaten in eight years in a contest that no less than the New York Times described as “one of the greatest gridiron battles ever witnessed here.”

So, yeah, fact checking would have helped this book a bit.

Still, Gold transcends himself in two chapters – the account of Coach Bryant’s death and the 1993 National Championship. There is a sincerity to these accounts that simply isn’t in evidence elsewhere in the book, quite possibly due to the fact he recounts these events as a participant rather than an observer – something that plays to his strength as a radio announcer.

Moreover, I cannot fault him for going out of his way to cast a spotlight on Harry Gilmer and Don Hudson Hutson– stellar players who were giants in their time but whose formidable accomplishments have become obscured by later, more popular, players such as Joe Namath and Ken Stabler (who are also represented here).

Crimson Nation is perhaps best taken as a simplified overview of the basic information all Alabama fans should be up-to-speed on. This, along with its simplified writing style and abundance of historic photographs, makes it an ideal book for a young reader with a curiosity about the program and a willingness to wade through patronizing copy to learn about it.

Next week: Another Season