The old adage in baseball is that you cannot enjoy a game without a good scorecard, and while football is a different animal entirely, nevertheless here is a short scorecard of things to keep your eye on with tomorrow's second scrimmage: 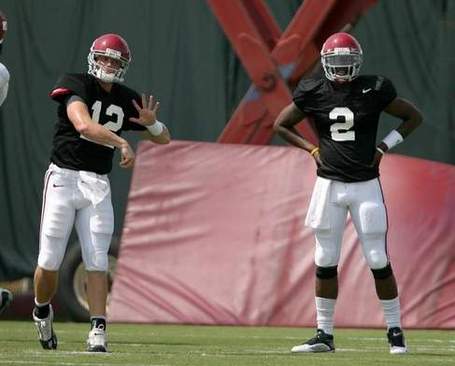 Backup QB Battle: It was evident in the last scrimmage that none of the three contenders for the back-up quarterback job had emerged as a leader, but at some point you must find a definitive replacement in case your starter goes down. Expect to start seeing that happen with this scrimmage, as at least some degree of separation between the three contenders should be evident come Saturday night. In particular, focus on snap distribution (i.e. the number of passes each quarterback throws). Just like anything else, scrimmage reps are a highly valuable, scarce resource and at this stage of the game you only give out those reps to players you think can legitimately help you. Also, keep an eye on turnovers as well. There is literally nothing worse a back-up quarterback can do than fail to protect the football, and the same goes for any quarterback vying for the back-up job.

Backup RB Battle: With Roy Upchurch likely missing this scrimmage with a minor injury, that opens up an even greater opportunity for someone else to step up in his absence. Coach Saban hinted last week at an expanded role this week for Trent Richardson, and I expect that to be the case. Eddie Lacy, too, will get his opportunity as well, and for Terry Grant time is quickly running out. Stakes are high, make no mistake about it... Grant's is attempting to salvage his football career, while the winner of the Richardson / Lacy battle will likely see a lot of meaningful carries in 2009, while the loser may well end up taking a redshirt. Once again, just like with the quarterback race, focus here on snap distribution. The one getting the most carries is probably the one most likely to play in two weeks. 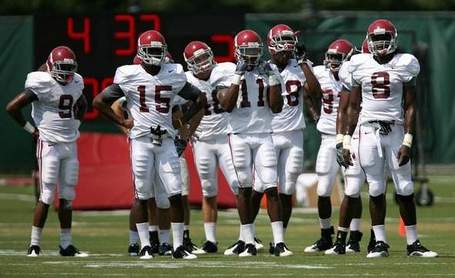 WR Rotation: Julio Jones is currently knicked up with a minor left ankle sprain, plus a taped up left wrist. He's a known commodity, while the rest of the receiver corps needs to shake itself out. That may lead to the coaches limiting Jones a bit in this scrimmage, and even if not the opportunity is there for the rest of the receiver corps to fill out the rotation. Darius Hanks, Earl Alexander, Marquis Maze, Brandon Gibson, and Mike McCoy have all had positive things said about them this Fall, but they need to separate themselves from the rest of pack starting right now. Likewise, for true freshman Kevin Norwood, immediate playing time is in his grasp with another good scrimmage, while Kendall Kelly and Michael Bowman really need to break through soon or otherwise a redshirt season may be imminent.

RG Battle: With Fall camp officially in the bag, all signs right now point to Barrett Jones being our starting right guard. Alfred McCullough, to the best of my knowledge, was last spotted taking reps again at left tackle, which is where he worked throughout the course of Spring practice. With another solid performance in this scrimmage, Jones could almost certainly lock up the starting job at right guard, and in doing so effectively put in stone our starting five heading to Atlanta.

Kerry Murphy: The Hoover product was a guaranteed lock to play in 2009 prior to the murder of his brother, but after missing most of Fall camp, no one knows exactly where he stands. We do know that he has been working at defensive end, and not nose guard, upon his return to practice earlier this week, and furthermore judging by the few pictures of him I've seen, he looks really thin (relatively speaking, of course). He originally signed in the 2007 class, so obviously a redshirt season is the last thing we want to do with him, but we've got to see exactly where he is after having to cope with recent personal tragedy. The second scrimmage will go a long way in revealing that. Hope for the best.

Safety Battle: Coming into Fall camp nearly everyone thought that Robby Green had the free safety position locked up, but Mark Barron has had a very impressive camp to date, and we now have a legitimate battle for the starting job. And in fact, recent signs have actually pointed to Barron having the upper hand. Both, of course, will make their case for the starting job tomorrow, and their respective performances will go a long way in determining that distinction. Keep your eye on two things... how does Mark Barron perform against the pass, and how does Robby Green perform against the run? We should pay extra close attention to Coach Saban's words on the subject.

Team Overview: At this stage of the game, positions on the team tend to become quite solidified. Coach Saban himself said we will begin some preparations next week for Virginia Tech, and if nothing else all of the player's attention is likely going to be on the Hokies once this scrimmage gets in the rear view mirror. Bottom line, after this scrimmage there will generally be little room for movement on the roster, and any player out there looking to make a late surge needs to have a very strong showing tomorrow. Coach Saban often talks about really needing 50-55 football players who you know will play throughout the season, and after tomorrow we should have a really good idea of exactly who those guys are, and exactly how they expect to be used.

Enjoy the game, and of course, pray for continued injury luck.