...or Todd Continues to Use This Ridiculously Obscure Title Reference Because He Can. 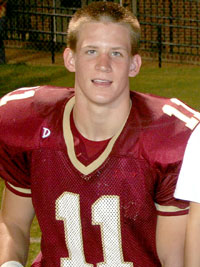 Most times I wouldn't do an entire profile piece on an unheralded three star recruit, but there are a couple of aspects to this commitment that make young Harrison stand out in my mind.

1. As the 19th commitment (21st if you want to count Devonta Bolton and Brandon Lewis, former commitments who will likely re-sign with the Crimson Tide out of community college), Jones is grabbing a spot that most observers (including our own OTS) didn't think was solidly available at this point in the game.  With several coveted blue chip recruits waiting 'til signing day (or at least close to it), and with this year's football season not even having started  yet to really get a good game evaluation of players, the staff must really like this kid to take a commitment from him right now.  Either that or the Jones family has incriminating photos of Nick Saban playing with puppies, rescuing baby seals from oil slicks, and reading to the elderly (you know, because Nick Saban is eeeeevvvviiiiillll).  This could also explain big brother Barrett's sudden rise to RG prominence after essentially being a non-factor until fall camp was already in full swing.

2. As a tight end prospect, Jones grabbing said coveted spot in the '10 recruiting class shows the staff is committed to making the TE position one of prominence and are looking for players that can provide plenty of quality depth there.  Further, considering the players that are currently working at TE and that are being recruited, there also seems to be a bit of a divide between the pass catchers and the blockers.  No doubt all will be expected to do both (and we will certainly be on the constant lookout for that rare gem like Colin Peek that can excel at both ), but it looks like Jones is going to be the pure pass catcher to the more well rounded Brian Vogler in this class.

Rivals rates Jones as a three star candidate, the 18th overall TE prospect, and the #7 overall player in the state of Tennessee.  His 5.7 rating means "All-Region Selection; considered among the region's top prospects and among the top 750 or so prospects in the country; high-to-mid-major prospect; deemed to have pro potential and ability to make an impact on college team."

Scout lists Jones as a three star as well, but rates him their #21 TE prospect.

ESPN is the highest on Jones, rating him their #8 TE and giving him a scout grade of 80, the lowest end of their "Oustanding Prospect" category ("Player has the ability to create mismatches against most opponents and could contribute as a true freshman").  Further:

ESPN's Craig Haubert said of the news, "We said last month when Alabama got a commitment from tight end Brian Vogler (Columbus, Ga./Brookstone) that they were adding a key piece that has been missing in recent recruiting classes. Now the Crimson Tide has struck again adding another tight end who can be a productive target in the passing game."

"Jones has good size and good hands. He is tough as a receiver and can make some plays."

"The Tennessee native has the tools to be a good well-rounded college tight end and now gives Alabama two four star tight ends in this class who have the ability to be factors in their passing attack."

Given the relative ease in which Brad Smelley was able to become a pass catching factor at TE (after moving over from QB) and the emphasis that he has placed on blocking this offseason, it's not difficult to imagine Jones also contributing right away (remember, Peek only has one year of eligibility and will be gone after this season) in the passing game before working into the regular rotation after an extra offseason to bulk up.

One of the better aspects of Jones's commitment is that the producer(s) of his YouTube highlight clips eschewed the oh so predictable crunk soundtracks that you might expect for .38 Special:


...hold on loosely is probably not the best advice to give a TE...

...and what I believe to be Coldplay (though it could also be The Fray, I'm not quite as good at discerning the differences between prissy, piano driven "rock" bands as I used to be).