Why Alabama Has to Beat the Hokies

Share All sharing options for: Why Alabama Has to Beat the Hokies

A (tongue in cheek) Response 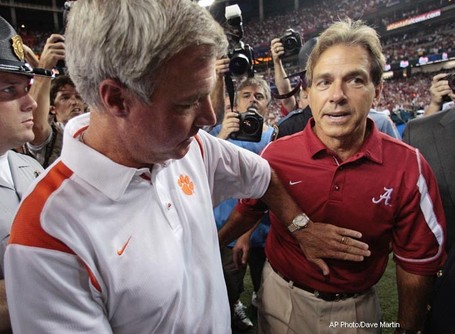 We're less than two weeks away from Alabama's game against Virginia Tech in the Georgia Dome. Coming into the game, more pressure seems to be on the Crimson Tide than the Hokies. There's good reason for it, too. Alabama, after a 12-0 regular season and top five ranking, has a lot more on the line in this one than Virginia Tech. There are several reasons the Tide HAS to beat Va. Tech on Sept. 5:

Because we want to win the national title.

This one's obvious. Both teams want to raise the crystal, but the Tide needs to grab a marquee win to start the season to stay in the national title discussion.  Sure, it's possible that a one loss SEC team could get into the MNC game, but consider: If Florida (or whoever wins the East) slips up and makes it to Atlanta as a one loss team as well, while Texas, Oklahoma, or USC (the teams currently ranked ahead of us) remain undefeated, the SEC is out of the picture.  We have to run the table if the national title is the goal, and beating a top ten team like an ACC Champion Contenders Virginia Tech to start the season would go a long way towards boosting our resume to be in the discussion at year's end.

Because they lost to LSU by 41 points.

The last time the Hokies tangled with an SEC opponent, they got taken behind the woodshed. If they can blow them out with a (mostly) untested QB then we darn sure better be able to as well.  On a more personal note, the last time we tangled with the Hokies, we were on the wrong side of the blowout fun after a 38-7 slaughter in the '98 Music City Bowl.  It's time for some sweet (drunken?) revenge.

For the second consecutive season, the consensus pick to be the ACC's national title contender is facing Alabama in the CFA Kickoff Game. Last year, Clemson signalled the beginning of the end for Tommy Bowden by getting embarrassed by the Tide. The SEC can't afford a similar showing from the Crimson Tide. The conference has been deified by the national media during its current dominance in the MNC games and people are wondering if the ACC is the worst BCS conference. It's not (thank God for the Big East, right guys?).  If Alabama, who is picked to win the West and considered the rest of the country's last, best hope to stem the Gator hegemony, can't get past another ACC opener then they not only let down Alabama fans...they let down the entire conference.

I have had it with everyone considering the ACC to be a rising conference with the potential to land a team in the National Title Game. Its more like the 12 teams in that God forsaken conference are all playing for someone, anyone to even notice they exist while the other 108 understand they are playing for the honor of being beaten by whoever wins the SEC. Its always been this way. Sure, the rest of college football runs in cycles; currently the Big 12 is the one that everyone considers the second best . And I'll give it to the ACC in this respect; They turned the basketball profiles of Duke and North Carolina into at least name recognition even if their on the field football prowess is somewhere between flat out "suck" and simply "bad." But name recognition aside, the product that God forsaken conference is putting on the field isn't so much worse than everyone else's that they deserve our pity.  Far from it.  Instead, they deserve nothing but our scorn. F--k the ACC, f--k its helpless fans and f--k everyone at ESPN that continues to put that abomination they call "football" on TV so that the rest of us have to suffer. That's why we have to beat the Hokies. Because this conference and its fans deserve better.