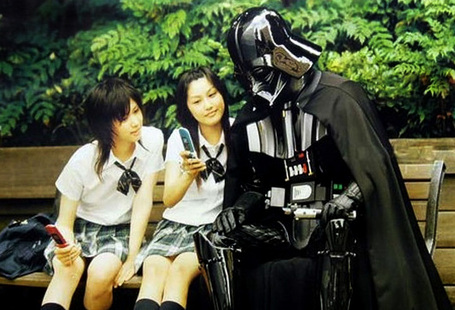 Even a Sith Lord needs help keeping up as the season gets closer.

Oh my stars and garters! Within days players will be reporting in and pre-season practices will be underway. That means the horrible ordeal of the off-season is finally entering it's endgame.There's a long way to go yet but starting this week we should be able to start getting actual football news instead of questions about whether or not star players are gettin' any.

So here's the weekend roundup to help you start the work week:

Orlando Rolando steps up: A story about Rolando McClain's leadership role on this year's team by Gentry Estes made the rounds this weekend. Good stuff  that should make you feel tingly in all the right places.

Pain is just weakness leaving the body: Roy Exum looks back on Coach Bryant's favorite drill to start pre-season practice - the 12-minute run. And his unique manner of motivating the stragglers.

Stock up on tar and feathers: It's Alabama Week at Team Speed Kills. So be sure to pop in over at our fellow SB Nation blog covering all things SEC and make sure they get the facts straight.

Preparing the object for the unstoppable force: SB Nation blog Gobbler Country that keeps tabs on Virginia Tech looks forward 33 days and breaks down the matchup between Terrance Cody and VT guard Sergio Render. The Alabama Conservation Dept. suggests the gobblers could be on a resurgence.

Unrest in the West: Last week TSK looked at Ole Miss and Red Cup Rebellion (the SB Nation blog covering the Rebels) claims to be more worried about Bama than LSU. And the Valley Shook likes that just fine but would like to clear up a few points concerning the matter.

That disturbance in the force last week?: Turns out Oklahoma's Bob Stoops was in T-Town on Wednesday.

But does he remember what the Aggies' record was that season?: Mike Sherman tries to revive his sagging program at Texas A&M by copying Coach Bryant's famous camp at The Junction. And, on a quasi-related note in Kentucky, Rich Brooks is looking to eclipse Coach Bryant's bowl record at the school.

Maybe a new agent would help: Cincinnati has started it's pre-season training camp and guess who is holding out? But it turns out you can take NFL training camps via correspondence course, so it's all good.

The NCAA is considering vacating wins for it: A Birmingham judge didn't buy the story spun by the mother of former Bama DT, Dominic Lee, who claimed the $250,000 she embezzled was actually a bribe to get her son to play for Alabama.

I'll just wait till I can piss on Furman Bisher's: Seems you can get a Crimson Tide logo on your gravestone for a cool $7K.

How about a pair of pink sidewinders and a bright orange pair of pants?: Auburn looks to succeed by focusing on the details.