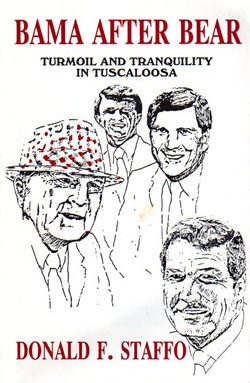 Alabama football found itself on the cusp of a new era in 1983 with the retirement and subsequent passing of Coach Paul W. Bryant. Instead of a period of forward looking optimism, the Crimson Tide faithful found themselves surrounded by uncertainty and disturbing change. And it took almost a full decade to fully recover.

Donald F. Staffo’s book Bama After Bear: Turmoil and Tranquility in Tuscaloosa examines that period of transition the football program and it’s faithful adherents through the painful process to find the next coach capable of leading them to a National Championship. It was a baleful era for Alabama football marked by recriminations and repeated missteps on the part of pretty much everyone involved.

Bama After Bear is not your usual feel good book about Alabama football. It describes an unpleasant time of the program’s history and can be tough going when Staffo decides to unpack the point of view of each and side on a given matter (I didn’t think it was possible to write at such length and passion about Bill Curry).The fact it boasts by far the worst cover art of any book about Bama football doesn’t help matters.

But if we want to keep from making these same errors ever again, Bama After Bear might be one of the most important.

Bryant's death of  was much more than the loss of a legendary football coach, it created a crisis for the university that few realized the scope of at the time. Over the preceding quarter century, Coach Bryant had consolidated his control over not just the football program but the entire athletic department. He was a master at keeping various factions at bay and allowed the football program to prosper unmolested.

With his passing, administrators long kept at the periphery of the largess brought in by the football program scrambled for control while coaches and staff tried to keep the status quo. Former players and boosters also vied for a place at the table. The result, when no single person or group was able to emerge clearly victorious, was institutional anarchy. Its not by accident that this period saw the ascendance of Paul Finebaum. 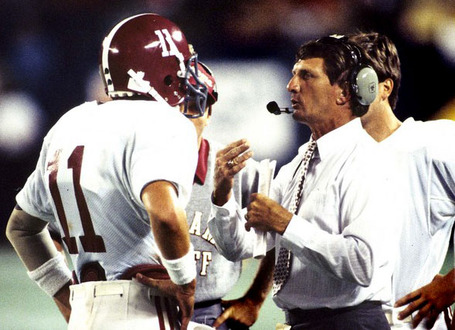 That the book ends prior to the start of the 1992 National Championship season is actually a strength. To close the book with such a success would have tempered the examination of the problems the Alabama program struggled through in the late 1980s up to and including Coach Stalling’s tenure.

It’s not very difficult to see how the absence of a singular authority in the program during this period opened the door to activities during the 1990s that led to the substantial NCAA sanctions. On several occasions in Bama After Bear, Staffo notes the lack of such investigations concerning the program and the irony in light of developments that happened after the book's publication is not pleasant.

Things started off rough in 1983 with the selection of Ray Perkins who was chock full of confidence or arrogance depending on who you ask. Describing his style during his tenure at the Capstone as "abrasive" would likely be safe to all points of view. His efforts to distance himself from the legacy of Coach Bryant (and his refusal to apologize for any of his actions) led to a culture of conflict that persisted over his three-year tenure.

That was epitomized by the decision to take down the tower on the practice field where Coach Bryant had overseen the creation of his teams for decades.  For a fanbase still grieving the legendary coach’s death, such stark erasure of his legacy was simply cruel.

So when Perkins brought the program its first season with a losing record in almost three decades and only improved marginally thereafter, the stage was set for his bolting back to the NFL at the first opportunity.

Bill Curry, of course, was a different problem. By all accounts he was a good man and a good coach who had the misfortune of interviewing amazingly well. But he was an outsider and his efforts to integrate with the fanbase was hobbled from the start. He was forced onto the defensive from the moment he was hired and never found a way to swing the situation to his advantage. Even though he led the team to a 10-win season in 1989 his losses to Auburn and the controversy surrounding his hire made his exit an inevitability.

The arrival of Gene Stallings then, by comparison, seemed a relief from the turmoil of the decade that had preceded him even though the team’s record fell precipitously in his inaugural season. Not only was Coach Stallings's history and personal style amenable to the Crimson Tide fans, it meshed well with the powers-that-be then presiding at the university.

This (and a first-year win over Auburn) bought Stallings time despite an abysmal inaugural campaign. He took that to rebuild the neglected defense (it’s not by accident all the offensive records fell in the years immediately prior to his arrival). The absence of controversy in Tuscaloosa and the advent of the Eric Ramsey pay-to-play scandal at Auburn led to a massive improvement in Crimson Tide recruiting.

Next week: A Damn Good Yankee