Share All sharing options for: Is Sidell Corley Transferring to Alabama? [UPDATED] 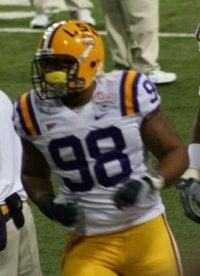 Rumors are flying around that LSU DE (and Mobile native) Sidell Corley is looking to transfer to Alabama. NOLA.com reports that Corley (along with two academic casualties) are no longer with the team, meaning Corley has either given up football altogether or is headed elsewhere. Sadly, the murder of his mother by her estranged husband could be the impetus for this decision as "being closer to family" is one of the several reasons floating around for his decision to leave the LSU program.

UPDATE: Corley is indeed transfering back to (the state of) Alabama to be closer to family.  From the Press-Register (emphasis mine):

Former McGill-Toolen standout Sidell Corley was released from LSU's football program Wednesday and will now look into an immediate transfer to Alabama or Auburn, his father told the Press-Register.

Corley Sr. said his son plans to apply for a hardship waiver from the NCAA to allow him to play this year, and would be willing to pay his own way if it would help him catch on with a program.

"We're going to try to get in somebody's camp here in the next couple days," Corley Sr. said.