Share All sharing options for: The Crimson Tide's 2009 Graduates 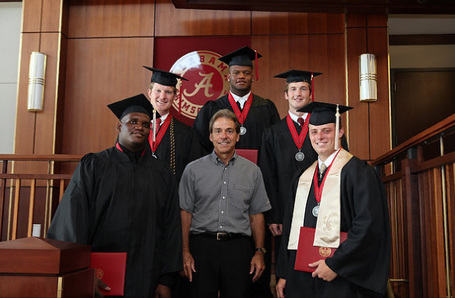 "It is a great feeling to get this first degree finished," McElroy said. "I made it a priority of mine to graduate in as short of an amount of time as possible, so I can focus on football and getting my masters degree in something that interests me."

According to the athletic department, no less than 11 Crimson Tide players will take the field in 2009 with degrees already in hand, including Drew Davis (marketing), Tyrone King (Health Studies), Eryk Anders (Health Studies), P.J. Fitzgerald (management), Mike Johnson (consumer affairs), Cory Reamer (finance), Chris Rogers (consumer affairs) and Ali Sharrief (human environmental science). On top of that another 10 players are on track to graduate in December.