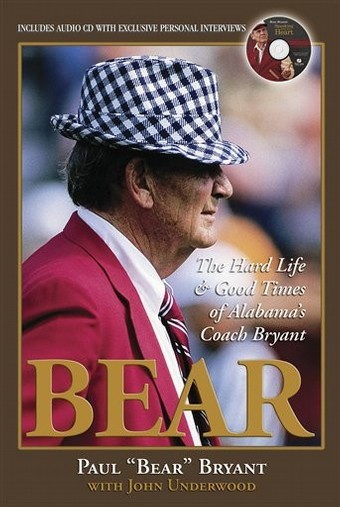 The late Polish philosopher Leszek Kolakowski once said, "We learn history not in order to know how to behave or how to succeed, but to know who we are." It's an idea one should keep in mind when attempting to understand the devotion Alabama football fans have for Paul W. Bryant.

So, it comes as no surprise, that first among the books any self-respecting Alabama fan  should count among their collection is Coach Bryant’s autobiography, Bear: The Hard Life & Good Times of Alabama’s Coach Bryant. But delving through this book is less an act of obeisance than an important element in understanding who we are as fans of the Crimson Tide. And that applies to ourselves as much as anyone.

As much as fans of Crimson Tide football are derided for our ongoing admiration of Coach Bryant, we accept that that attribute of our devotion is a key element of who we are. But, for any college football fan, the legacy of Coach Bryant is inescapable. He remains one of the most important figures in the history of game – and that fact remains valid even if your choice is to deify the man or demonize him.

If you love college football you have to lock horns with his achievements and Bear is the best place to start.

In writing Bear, Coach Bryant was certainly savvy in choosing John Underwood to co-write the tome. The former Sports Illustrated scribe does a fantastic job streamlining Coach Bryant’s famous rambling prose into a flowing narrative that loses none of the distinctive tone so identified with his way of speaking.

This book is the home of any number of adages and observations oft attributed to Coach Bryant, up to and including the oft invoked "croak in a week" comment. If you have read any of the numerous biographies of the man you'll find whole swaths of Bear familiar territory.

The book covers all the usual bases, his playing career and stints coaching at Maryland, Kentucky and Texas A&M. He recounts the key victories and losses along the way and pauses to touch base on all the major controversies as well. There's a lot of his humor and a bit of the camp but not nearly enough of either to satisfy a true fan.

Bear also has a number of insights into his strategic approach to the game – something most books about the program’s heyday tend to gloss over. Coach Bryant spends the good part of one chapter explaining in substantial detail why the switch to the Wishbone offense was so effective and how it could be used effectively.

But make no mistake, Bear is clearly Coach Bryant's way of getting the last word on a number of issues that had occurred over his long career. The book is a unique platform for him to make his case and he uses it to it's fullest. The seeds of the subtle revisionism that has overtaken the more controversial aspects of Coach Bryant's career are sown here.

Somewhat related to that is Coach Bryant's tendency to fall into the most politically expedient manner of explanation when in the public eye. He could opine at length about the strong points of opposing players and coaches after a particularly brutal beatdown knowing full well the scoreboard spoke more loudly on the matter.

You don't have to get too far into the book to realize Coach Bryant has penned the book with one eye on his legacy. And, in that, he clearly understood that encompassed much much more than just college football.

Tell me you would not run through a brick wall for this man.

In an essay featured in the first edition of The Encyclopedia of Southern Culture, historian Charles Reagan Wilson called Coach Bryant "one of the South’s preeminent mythic figures" and explained his appeal as transcending the both game or the university that became synonymous with his legend.

"The Bear Bryant story is a rags to riches American tale, told in the southern vernacular. In his origins, Bryant symbolized the poor sharecropping South, but he became a middle-class hero to well-off southerners who made football a part of their lifestyles."

In the quarter-century since his death, this tendency has hardly slowed down at all. In fact, it’s probably stronger than ever.

The popularity of Crimson Tide football throughout the state is key to understanding the importance of Coach Bryant among the fanbase.  Unlike many college programs, Alabama football fandom is not the exclusive domain of those attending the school – by definition, those with college educations. It is, in many ways, a birthright of those native to the state.

Despite his rural upbringings he was resoundingly successful against more urbanized contemporaries. Or, as sportswriter Al Dunning put it, he was a back woodsy man "who the city slickers couldn’t beat."
But, as Wilson pointed out, his success – both on the field and in business – made him acceptable to more affluent fans as well.

This served to make the team the province of a much wider fanbase with a much more varied socio-economic background. For many, Coach Bryant represents far more than the leader of the football team – he is their champion. And you better believe he completely understood what that meant.

Because, while he was un-matched as a football coach, Coach Bryant also had the unerring instinct of the classic southern populist politician (although his brushes with politics during his career were uncharacteristically clumsy). In fact, he was ahead of most politicians of his day in understanding the power of television and how it could be used to his advantage. His own bully pulpit, The Bear Bryant Show, was a bona fide hit across the state reaching far further than the University’s alumni association could ever hope to match.

Few people had such an unerring instinct on how to present themselves to the greatest advantage as Coach Bryant, no matter what the actual situation consisted of. Yet it is this tendency to rely on political expediency that can be one of the most frustrating obstacles to gleaning a true insight  about the man. Too often he seems to say what he is supposed to be saying rather than what he actually feels.

The premier example of this is the 1960 game against Georgia Tech where the Alabama team went to the locker room at halftime after an uninspiring showing. The scoreboard read 15-0 but that didn’t do justice to the lackluster performance on the field. Alabama didn’t even muster a first down until the last play of the half.

But instead of launching on one of his famous barn burner performances like the team expected, Coach Bryant told the team "We got ‘em right where we want ‘em." He went on to make a few adjustments to the game plan and sent them back on the field where they played an inspired second half and won 16-15.

Yet, in Bear, he admits he walked into the locker room at a complete loss. "I didn’t know what to do or what to say. You have to have a plan, but I was fresh out… I knew they expected me to blow up, rant and rave and chew some tails. But if I did, I was afraid we’d lose by 50."

So which perception is correct? The coach instinctively knowing which course to best inspire his team and then downplayed his actions or that he was really so desperate at that point he was searching for any option to save the game? Most likely a little of both, but that doesn’t get you a hell of a lot closer to understanding what made the man’s mind tick.

Eventually, you just have to take the observations Coach Bryant provides in Bear at face value. And this is the major problem with the book. In many ways it reads like a revisionist history of Coach Bryant’s career. He clearly felt it important to get his side of the story out but often to the point where he seems to be protesting too much.

Three chapters of the book are dedicated to the lawsuit against the Saturday Evening Post. By settling the case, Coach Bryant didn’t have the resounding victory in court as he enjoyed during the trial for Wally Butt’s related legal action.

Yet, a review of the case shows that Coach Bryant was likely on shakier footing than before and the likelihood of the Post’s lawyers being so epically inept as they were during that proceeding were slim. So a huge chunk of Bear is devoted to him making his case and it only serves to add fuel to the numerous disturbing questions raised by the incident. (Furman Bisher, of course, was then and remains now a complete and total asshat.)

Yet, after all the controversies and allegations that swirled around Coach Bryant during his lifetime are sorted out what remains is an unmatchable legacy embodied in a staggering win/loss record allied with the sheer total of conference championships and national championships collected by Alabama under his watch.

While Bear is the final word on Coach Bryant's legacy, the book is more important as the starting point for anyone, not just Crimson Tide fans, who want to learn more about the man within the legend.

And that wraps up the RBR Reading Room for this off season. Thanks for all the kudos and commentary over the past three months. I've had a blast and we're already planning to bring it back next off-season. - kleph