Share All sharing options for: The Florida International Preview

All throughout the off-season the general consensus among most 'Bama fans, and particularly many of those here at RBR, was effectively, "Sure, Virginia Tech is a great non-conference game, but the other three are a laughingstock." When people referred to Florida International, they generally mentioned their winless 2006 campaign, or their 23-game losing streak, or maybe some sarcastic references to the hiring of Isiah Thomas.

So, the Golden Panthers ought to be the most delectable of cupcakes, right? A game where a blowout victory of massive proportions is almost guaranteed simply by showing up, correct? Well, no, not exactly.

Florida International is by no means a great team, and truth be told they likely do fall within the "cupcake" category. That said, this team isn't anywhere near the laughingstock that many of our fans made them out to be in the off-season. Yes they did go 0-12 in 2006, followed up by a 1-11 campaign on 2007, and in that particular stretch they probably were the worst team in all of Division 1-A college football. But, much like with Alabama, things have changed for FIU since their ebb in 2006-2007.

Mario Cristobal was brought in as the head coach following the disastrous winless campaign of 2006 -- most Alabama fans will remember Cristobal best as the starting left tackle on the 1992 Miami Hurricanes -- and despite a tough start, Cristobal has done a nice job and has turned the Golden Panthers around. He broke the winless streak on the last weekend of the 2007 season, with a three-score win over North Texas, and his team took a major step forward last year. It wasn't a great campaign, but they did go 5-7 and would have made a bowl game had they not lost the penultimate game of the season, in overtime, to Florida Atlantic.

Truth be told, Cristobal is a a young, promising coach making a very quick rise through the coaching ranks -- a rise that will likely see him getting a much better job in the near future -- and without doubt few teams showed more improvement than FIU did in 2008. And, for what it's worth, the FIU surge of a year ago does not look to be an anomaly either. Despite a very tough non-conference schedule, no one should be overly surprised to see these guys end up with a winning season in 2009 and a berth in a bowl game.

On offense, FIU runs a spread passing attack, and believe it or not they actually return more starters on the offensive side of the ball than any other team on the 2009 schedule. At quarterback, senior Paul McCall returns, and he looks to build off a solid 2008 season. McCall is a bit short for a traditional pocket passer, and his accuracy isn't overly impressive, but he generally did a good job moving the FIU offense a year ago. He has decent mobility, but his specialty a year ago was largely not making dumb plays, and also hitting the occasional big pass. He's not the second coming of Johnny U, of course, but he's a capable player who should not be overlooked.

Likewise, all five starters return on the offensive line, but that's not necessarily saying much of anything. The tackles, Joe Alajajian and Ula Matavao, are the best of the group, and while it's a decent looking group by Sun Belt Conference standards, they are likely to be in for a major fight against a defensive front as talented and as deep as what Alabama will put on the field. Furthermore, this is a group that struggled in pass protection a year ago, with an adjusted sack rate of almost 8.0%. Likewise, there are new faces at tailback with Darriet Perry and Daunte Owens -- and like Alabama, FIU does not make any real use of a traditional fullback -- but FIU didn't run the ball very well a year ago and that probably will not change much in 2009.

The real show for the FIU offense comes at wide receiver. They have a good, solid unit with Junior Mertile and Greg Ellingson, but the real show-stopper here is sophomore T.Y. Hilton. As a player, Hilton is clearly on the small side, but he's a great athlete with good speed who is very dangerous in the open field. A year ago, he averaged almost 25 yards per catch -- despite getting over 40 catches -- and he can be a real threat even for a defense like the one that Alabama can field. 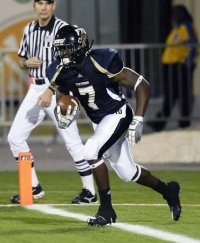 Defensively, things aren't quite so rosy for FIU. The Golden Panthers 4-3 base defense returns only three starters, and there will be a lot of new faces all over the defensive side of the ball. The entire defensive line must be replaced, and while there are a couple of seniors up front in Reggie Jones and Jonas Murrell, the overwhelming majority of the defensive line rotation will be first and second year players. Outside linebacker Scott Bryant and cornerback Anthony Gaitor are both good players -- and that goes, in particular, for Gaitor, who picked off several passes a year ago -- but on the whole the FIU defense wasn't a very good unit a year ago, and with all of the young players and the new faces needing to fill major roles in 2009, it's hard to see them making any major improvement.

This is, of course, a game that Alabama should win. We have much more top-end talent, experience, and depth than do the Golden Panthers. Our lines ought to be able to control the line of scrimmage on both sides, and we should be able to establish the run. We'll have to play a lot more defensive backs thanks to FIU's spread passing attack, but even so we should be able to handle their passing game pretty well. Our pass rushing efforts should bode well unless FIU has really improved in pass protection, and if nothing else our superior depth ought to wear this team down over the course of four quarters.

Again, though, this team isn't the laughingstock that many of our fans have made them out to be in the past few months. They are clearly a better team than ULM was in 2007, clearly a better team than Tulane was a year ago, and they are probably a slightly better team than Arkansas State was a year ago. That is not to say we shouldn't win, but it is to say that a victory isn't necessarily a guaranteed outcome, that we will have to go out and play quality football to win, and that we will have to play even better to win by the blowout margin that many expect.