A Tale of Two Halves: The Tide Passing D vs FIU

Share All sharing options for: A Tale of Two Halves: The Tide Passing D vs FIU

With all of our concerns over the way FIU was moving the ball through the air early on, this quote from Saban got me to thinking:

"We played more zone in the second half on defense, probably that was the biggest thing that we did," said UA coach Nick Saban, "We played a lot of pattern match man stuff, and they were running crossers and pick routes which really wasn’t their deal coming into the game."

How much did our change in coverage affect their offense?  First, let's take a look at the basic drive data: 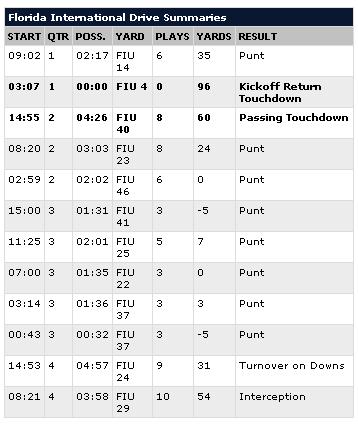 Going from there, you can see that the difference between first and second half is night and day. Of the four FIU drives during the first half (I'm discounting the KO return for a TD) all four were six plays or more and three resulted in at least 20 yards gained.  In the second half, of the seven drives FIU mounted, four of them resulted in three and outs, one only netted them seven yards, two resulted in lost yardage, and the only two successful drives of the evening ended in a turnover on downs and an INT (the last of which was against a defense consisting of mostly reserves).  Looking further, the QBs numbers dropped significantly as well:

As you can see, McCall attempted the same number of passes in each half. Though his completion numbers dropped only slightly in the second half, his yardage was cut almost in thrice and his yards per completion were down to 7.7 from 15. Even though he was still making completions, they weren't going for the kind of big yardage that we saw in the first half. Also of note, backup QB Wayne Younger played at the end of the game and his numbers (2/6 for 24 yards and an INT) were wholly lackluster.