This week, we're going to welcome back the Running Back Success Rate analysis. This has been popular over the last year or so and we'll be doing it for every game again this year. We simply forgot to do it for week one against Virginia Tech and that'll appear later this week because, hey, we're Alabama fans and we'll obsess over this kind of stuff all day long even if it was nearly two weeks ago by the time it gets posted. In the future, we'll typically run this bit of info on the Monday following the game. Due to real life intrusions and the fact that we had six people (not counting the QB) carry the ball, I'm going to break this week's analysis into two parts: one to be posted today and the other on Tuesday evening or Wednesday morning.

For those of you unfamiliar with the Running Back Success Rate metric, the idea behind it goes a little something like this: The oft-seen "yards per carry" stat is frequently misinterpreted and/or abused when determining a running back's success during a game. A running back could have 20 carries for 100 yards and you think, "Hey, that's five yards per carry. That's pretty solid." But what if it were one carry for 81 yards and 19 more carries for one yard each? All of a sudden, that doesn't look so productive anymore unless that 81 yard run produced a game winning TD. What the running back success rate aims to do is to treat each carry as a success or a failure and to take down and distance into account to measure the success or failure of a carry. It is measured like this: A first down rush is successful if it covers 40% of the yardage needed for a first down, a second down requires 60% and third and fourth downs require 100% of the needed yardage to be achieved to be deemed a success.

Of course, there is no perfect measure of success, but we here at RBR feel this metric is more accurate than the oft-cited yards per carry stat. It should be noted that only designed runs count and so we're not going to determine the successes and failures of QB runs off of busted plays. (note: any of the spreadsheet graphics can be enlarged by clicking on them...really only necessary with the Richardson chart.)

I'll introduce the RBs below in the order they got their first carry of the evening. First up, Roy Upchurch: 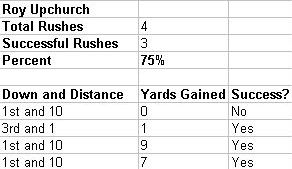 Upchurch took four of the first five carries of the evening. Unfortunately, the injury bug struck again and Roy's evening ended at four carries. Besides the obvious of never wanting to see a player hurt, Upchurch was looking like he'd be in good form for the evening as he finished with a 75% success rate. Two of them were big gains on first and ten and the other success was a successful third down conversion. Only his first carry (also our first offensive play of the game) was a failure. Needless to say, we wish Upchurch a speedy recovery.

Next up: JULIO JONES

No, he's not a running back, but if you're taking handoffs or pitches in the backfield then it's a designed run play and you're essentially a running back on that play. Unfortunately SBN's nifty little widgets don't produce rushing stats for players listed as receivers so we won't have that on hand for reverses, endarounds, etc. to receivers. Anyway...

Julio's lone carry picked up a first down and then some. I imagine we're going to see more of this kind of stuff in the future, though hopefully without the injuries. On to the next player and back to a true RB: 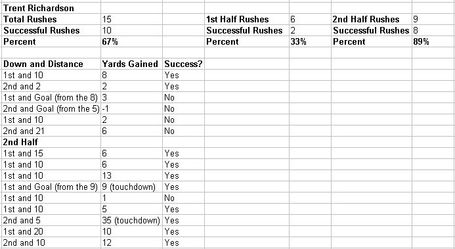 Needless to say, Richardson had a monster of a game, or more precisely a monster of a second half. He was only successful on a third of his carries in the first half; though that does include an unsuccessful, stat-skewing carry on 2nd and 21. I suppose that has to be overlooked though considering he made successful carries twice in the second half where more than 10 yards were needed for a first down. He finished the second half with an astronomical 89% success rate and only one carry for less than five yards. This is a heckuva way for a freshman to compete in his second game...and no, I don't care if it was just FIU, that's big time for a new player no matter who the competition is. He ended up with a 67% success rating for the evening and had two TDs and a couple of receptions as well (not to mention picking up several first downs.) Hopefully this is just a small taste of what's to come from Mr. Richardson. So far, he looks as good as advertised with 141 total yards and a pair of TDs for the night.

Success rates for Terry Grant, Mark Ingram and Demetrius Goode will be in part two.