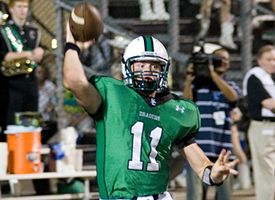 When the 2004 season came to a close, North Texas fans had to be feeling pretty well. With a blowout win over Arkansas State in the regular season finale, the Mean Green wrapped up their fourth consecutive Sun Belt Conference championship and were headed to New Orleans for their fourth consecutive bowl game. Unfortunately for the North Texas faithful, however, the wheels fell off the following year. Then head coach Darrell Dickey would go 2-9 and 3-9, respectively, over the course of the next two seasons, bringing his nine-year tenure to an end.

Looking to breathe new life into the program, North Texas went into the high schools ranks and hired Todd Dodge, head coach of Carroll High School, one of the nation's most prolific high school football programs. Leading the Carroll Dragons, Dodge went a combined went a combined 79-1 in his final five years at Carroll with four state championships coming in five years -- the only loss came in the state championship game in 2003 in a 16-15 loss to Katy. Dodge had previously coached at North Texas in the early 1990's, and having that kind of success just 20 miles south of Denton proved to be too tempting for the Mean Green administration to pass over.

Unfortunately, the Dodge era at North Texas hasn't exactly gone to plan. He went 2-10 in his debut campaign, and things got worse in 2008 as the program fell to 1-11. Making matters even worse, the losses generally weren't even remotely close. Nine of the eleven losses came with a margin of defeat of 28 points or more, and Rice even managed to put 77 points up on the board. The sole win came after winning a 51-40 shootout over Western Kentucky, a Division 1-AA team trying to make the jump up to the highest classification. As a result, not surprisingly, Dodge comes into the 2009 campaign with an increasingly warm seat. His tenure hasn't been entirely a disaster -- he hire created a lot of publicity, he has made some strides recruiting the Dallas area, and interest in the program is clearly up -- but everyone knows that this game is ultimately a game of wins and losses, and no coach with a career record of 3-21 can ever feel safe in his job.

Offensively, North Texas likes to spread the field and throw the football. Their base formation is a four-wide receiver set, and they operate almost solely out of some variation of that personnel grouping. There are no fullbacks on the roster, nor are their any tight ends. It's a spread team at its core and they make very few intentions of doing anything else.

At quarterback, normally, is Riley Dodge, son of head coach Todd Dodge. The freshman Dodge is a dual-threat player who is probably the biggest recruit the North Texas program will ever get -- he was committed to Texas before spurning the 'Horns to play for his father -- and he's legitimately a good player. Though he's a bit of a small player, he can make plays with his feet and he is an accurate passer. Fortunately for the Tide, however, Dodge separated his shoulder last weekend against Ball State, and he will not play this Saturday. In his place will be Nathan Tune, a senior, who is more of a traditional pocket passer without near the mobility and athleticism that Dodge brings to the table.Tune's start against Alabama will be the first start of his career.

The wide receiver corps, likewise, is also a major question mark at this point. They have only one returning starter from a year ago, sophomore Sam Roberson, and it's been a unit that has struggled to date. Mike Outlaw dropped two critical passes last week in the loss to Ohio, and outside of one long catch-and-run by JUCO transfer Jamaal Jackson, the unit as a whole has failed to generate any big plays. 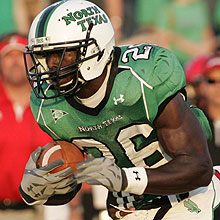 With question marks at quarterback and wide receiver -- already a big negative for a spread passing team -- the strength of the offense becomes the line play and the tailbacks. The offensive line itself is a veteran group that returns all five starters from a year ago, and they do have as many as eight linemen with meaningful experience. Unfortunately for North Texas, however, starting left tackle Victor Gill will also miss this game with a separated shoulder, and that has caused a re-shuffling of the offensive line. It's still a pretty decent group even without Gill, but his absence clearly makes life easier for the Crimson Tide defense.

With both the starting quarterback and starting left tackle missing this game, not to mention question marks at wide receiver, expect tailback Cam Montgomery to take on a pretty big role in this game, and don't sell short on Mr. Montgomery. He plays the part physically, coming in at around 6'1 and 220 pounds, and he's a physical back who is difficult to bring down. He was a four-star recruit coming out of the Mississippi JUCO ranks, and he rushed for almost 1,000 yards and 9 touchdowns last year. He'll have an even bigger year this year, if he can stay healthy, and you may very well see him playing on Sunday.

Defensively, North Texas was absolutely atrocious last year in every single facet, effectively finishing as nearly the worst team in the country in almost every single major defensive category. In the off-season, though, Dodge brought back former defensive coordinator Gary DeLoach, and the early returns look good. Eight starters return from a year ago, and through two games the unit as a whole looks much improved. They only gave up 10 points to Ball State, and the following week gave up only 13 points in regulation to Ohio. It's nothing overly special, of course, but the defense does look to be a relatively solid one thus far, and honestly there are some talented players on that side of the ball. The defensive line is a bit green, but Craig Robertson and Tobe Nwigwe are both very good linebackers, and honestly cornerback Kylie Hill would probably be one of the SEC's better defensive backs, and he will probably play in the NFL next year.

For the Tide, offensively we will probably continue to do what we have done to date. We will have a multiple attack that will look to both establish the run and throw the football efficiently. Roy Upchurch is almost certainly out of this game, and likewise Julio Jones probably will not play, but the Tide should have plenty of skill position firepower to get the job done even without those two participating. Expect a lot more touches for Trent Richardson, Terry Grant, Mike McCoy, and perhaps Michael Bowman. Likewise, on defense, don't expect to see anything overly different than what we typically do. The biggest adjustment will likely be in terms of personnel. If the Mean Green spreads the field with four wide receivers as usual, expect to see a lot of nickel and dime packages from the Tide, and specifically look to see more playing time for the likes of Dre Kirkpatrick, Robby Green, Ali Sharrief, Tyrone King, and Chris Rogers.

And that is effectively the North Texas game in a nut shell. After being easily one of the worst teams in the country from 2005-2008, if early returns hold true, the Mean Green looks to be an improved team this year, but even so it's a team that should give Alabama no real trouble. And frankly, with Riley Dodge and Victor Gill missing this game, the Tide simply ought to beat North Texas like a drum. No excuses. In a game like this -- at the risk of causing another ULM-esque disaster solely due to bad karma with the Football Gods -- it's not a matter of whether you win, it's a matter of how you win, and how healthy you are once the clock reads 0:00. Last week's win over Florida International was a solid victory, but with Julio Jones banging up his knee, Roy Upchurch getting a high ankle sprain, and Damion Square being knocked out for the remainder of the year with a torn ACL, it was a very costly victory. For the North Texas game, the Tide should win with relative ease, but we all just have to hope that the price of victory isn't quite so high against the Mean Green.