Box Score and Such: The Season So Far

Share All sharing options for: Box Score and Such: The Season So Far

I'm going to take a different approach this week while looking at the UNT box score.  Since it was our best performance to date, we'll compare all three games to see what sort of improvements have been made over the first three weeks.  First up, on offense:

Notice the steady improvement in the following categories:

1. First Downs: The offense is gaining more first downs each consecutive game, including against UNT where we were playing Star Jackson (and essentially the rest of the backups as the 2nd half went on) for effectively half of the game.

2. Third Down Conversions: A severe sore spot in the first two weeks, our third down conversion rate jumped up to 75% against UNT (again, playing mostly 2nd stringers throughout the second half).  We can argue that UNT's defense aided in that greatly, but we weren't shooting ourselves in the foot with penalties and digging into 3rd and long situations in this game either.

3. About Those Penalties: OTS's penalty breakdown post should be a short one this week after commiting only 2 for 15 yards. That's pretty well back to '08 standards and a welcome sight (again, especially since we were playing a lot of young backups).

4. Total Yardage: Total yardage has increased in each game so far, as well as total passing yardage.  The decline in the relative defensive prowess of our opponents certainly helps, but you can still argue "as defenses get worse, our offense should perform better."  I'd be concerned if we weren't improving, and, again, we were still driving the field with relative ease with the second string in.

5. Time of Possession: The only stat that has dropped each game so far.  Not sure what to make of this one, honestly.  On the one hand it could be a function of the improved offense and the big play mentality this season (as opposed to last year's ram it down their throat and keep their offense off the field approach).  On the other, it could also be a function of our defense not getting off the field as quickly and as often as it should.  I'll also note that TOP is one of the most useless statistics out there, so I'm not going to fret over it too much.

On to the defense:

The first thing that pops out is the increase in third downs converted on our defense along with the increase in completion percentages through the air.  Going from a lackluster offense like Virginia Tech's to two spread oriented attacks like FIU and North Texas will do that, of course, but what should also be noted is that our defense held both teams to only about 5 1/2 yards per play through the air (while our own was grabbing 7.7 per play in it's worst performance).  Though we are allowing completions, we're keeping everything in front of us and not giving up big plays (or even many runs after catch).

Players of the Game 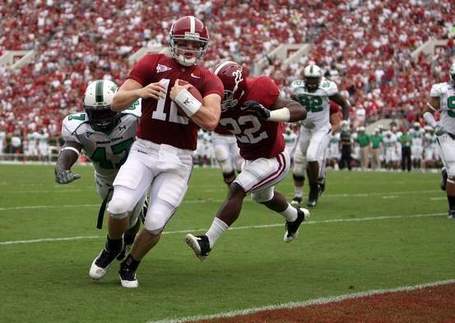 Once again, that honor has to go to young McElroy. As OTS noted in his initial impressions post, "ever since he took off in the Virginia Tech game, he has been practically unstoppable. I think he threw about one bad ball today, but aside from that his performance was completely flawless. And the amazing thing is that he has had three touchdown passes dropped the past two weeks, which means his already gaudy statistics ought to be even more inflated. I'm sure it won't be this good all year, but you would have been hard-pressed to even script a better debut for McElroy."

With all the preseason hype surrounding Julio Jones, he has been a total non-factor so far this season due mostly to injury, yet Alabama is still managing 244.7 yards per game through the air (5th in the league, though 2-5 are essentially tied with only about 5 yards per game difference among them) thanks in no small part to the other receivers (and TEs and RBs) stepping up in his absence. Eleven different players caught at least one pass on Saturday, and it seems like each game someone new is coming up big time and making a push for more balls to be thrown their way. 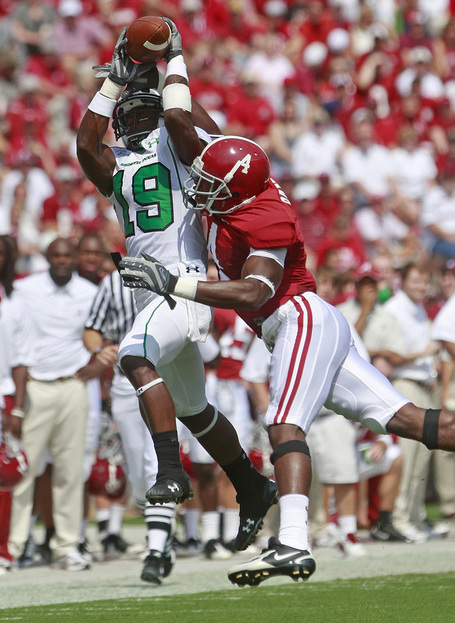 With five total tackles, one tackle for loss (a 10 yard loss on a beautifully read receiver screen), and two pass breakups, Barron is starting to look a lot more comfortable in his starting role at safety.

The big man also had 5 total tackles and a tackle for loss in the game, and he and the rest of the d-line rotation wreaked havoc on the UNT line all day long, allowing us to drop more guys into coverage against their spread offense.