Alabama vs North Texas: Yet Another Kick Coverage Breakdown...

Share All sharing options for: Alabama vs North Texas: Yet Another Kick Coverage Breakdown... 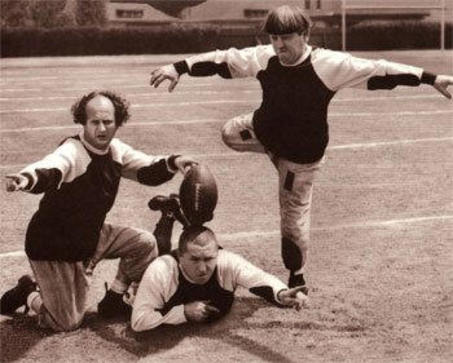 Leigh Tiffin kicks off from the right hash, and he actually hits a very nice kick here. The kick was intended to pin the North Texas return game to the right, and that's exactly what Tiffin does here, hitting a good, 67-yard kick  almost precisely where the coaching staff intends for the ball to go. For whatever criticism you can make of Tiffin on some kick-offs (and everything else for that matter), he gets the job done here to perfection on the kick.

The kick is fielded by Ira Smith, a 5'11, 180 pound corner for the Mean Green. He cuts upfield quickly, and the blockers in front of him do a nice job of sealing off both Chris Rogers and Mark Barron. That allows Smith some daylight, and it's precisely at this point that the Alabama kick coverage goes straight to hell. Alabama has two defenders immediately in front of Smith who should make the tackle at around the 30-yard line. Those two defenders are Courtney Upshaw and Leigh Tiffin.

Upshaw was a special teams terror a year ago, but to paraphrase an old saying, that was last year and this is this year. Upshaw gets a clean shot at the much smaller Smith -- to the tune of about four inches shorter and about 70 pounds lighter -- but nevertheless Smith shoots through a weak tackle attempt at his legs by Upshaw. Truth be told, Upshaw should have just been able to clean his clock with no real problem, but a poor tackling effort on his part completely negates that possibility.

And Leigh Tiffin's performance, for whatever criticism you make of Upshaw's weak attempt at a tackle, is even more damning. He moves in to make the tackle, but instead of actually, you know, trying to make a tackle, he just stops and moves away from the ball carrier. In effect, he basically decides that he'll just go get a good birds-eye view of Upshaw bringing down the North Texas kick returner. But, of course, Upshaw misses the tackle and Tiffin ends up getting the best seat in the house to watch it all unfold as Smith goes shooting past both defenders. With a performance that pathetic, if he's going to do that little, Tiffin might as well just jog off the field as soon as he kicks the football. Given Tiffin's performance here, it's truthfully 11-on-10 out there.

As a result of the foregoing incompetence, Ira Smith has nothing but green grass in front of him and quickly breaks into the open field. Fortunately, just like he did in the Virginia Tech game, Marquis Johnson shows a lot of hustle and chases the play down from the backside. He doesn't get in to make the tackle, but he forces Smith to slow up enough that it allows Robby Green to come back into the picture and make that tackle. That limits the return to "only" 67 yards -- Green dragged Smith down at the Alabama 30 -- when it otherwise would have been yet another touchdown. Still, even with that slight limitation, it was a disaster.

Fortunately, of course, the long kick return is called back because North Texas' Cam Montgomery is called for a block in the back on Alabama's Rod Woodson. And, if you look at the film, it was a good call by Hubert Owens' crew. Woodson had gotten through and, when he attempted to get in position to make the tackle, Montgomery clearly blocks him in the back. There is no doubt that this was a technical violation of the rule.

However, North Texas' long kickoff return was not caused by Montgomery's block in the back on Woodson, and in fact Montgomery's block in the back on Woodson was a meaningless foul that occurred away from the ball. True enough Woodson was in the general vicinity of Ira Smith, but he was still eliminated from the play. He likely would not have been able to get over and get a hand on Smith, and even if he had been able to do that, he would have nevertheless been picked up on a clean block by North Texas' James Hamilton, who was in place and prepared to block Woodson had Montgomery not gotten Woodson from behind.

In other words, it was a clear penalty, but it was also yet another blown kick coverage by the Tide that had nothing to do with a penalty. The kick coverage breakdown was not caused by the penalty, and far from it, 'Bama was simply lucky as hell that a North Texas blocker decided to commit a penalty on an Alabama player that was eliminated from the play. Penalty or no penalty, thanks to whiffs from both Courtney Upshaw and Leigh Tiffin, this kick return was going to be a big one for the Mean Green. It was nothing more than pure crimson luck that erased this breakdown in kick coverage.

Whatever problems we had in kick coverage against Virginia Tech and Florida International, those problems certainly weren't fixed by the time North Texas arrived in Tuscaloosa. I just pray that we can somehow get it all figured out by the time Dennis Johnson reaches the Druid City this weekend.