Share All sharing options for: Running Back Success Rates: Alabama vs. North Texas

Much like the Florida International game, our success rates against a defense like North Texas aren't going to tell us a ton about our running game, but still, we want to provide the information for your perusal. I've been delayed on processing the VT numbers and will have those ready on Wednesday or Thursday. Anyway, four backs carried in our game against UNT and, as always, they'll be listed in the order they got their first carry. For those of you that need a refresher on RB success rate, it goes a little something like this: a carry is successful if on...

Ingram had another solid day with 129 all-purpose yards (91 rushing, 38 receiving) and he had both a rushing and receiving TD. Actually, I guess you can't get much more perfect than having every carry you take be deemed a success.

Richardson turned in another solid performance as well. Nothing you can really complain about when 73% of his carries were successful. Two of his three unsuccessful carries were only a yard short of being deemed successful so he was two yards shy of being 10 of 11. His carry for (-1) yards in the first half was the only negative play we had all day as far as designed runs were concerned. 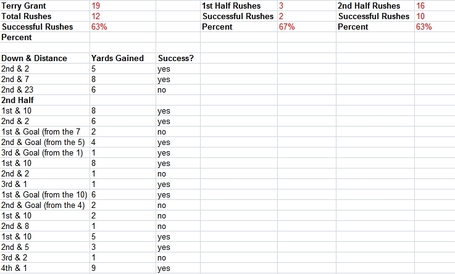 Grant got more carries than any other back in the game. He had as many as Ingram and Richardson combined. Considering the fact that the lion's share of his carries came in the 2nd half behind non-starters, I'd say his overall 63% is quite good.

With only one carry, there's no need to construct a chart for Goode. His 14 yard carry was on a first & 10, putting his success rate at 100% for the day.

Needless to say, we pretty much ran the ball at will against North Texas. Our overall team success rate was 74%. We had eight carries of 10 yards or more and 21 carries of five yards or better. Move the ball like that and it's nearly impossible not to win. This analyses will get more interesting once we delve into conference play.